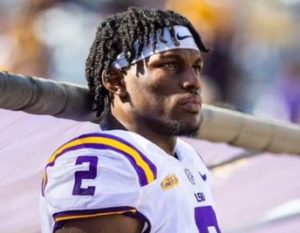 A promising pro football prospect, Arik Gilbert announced that he was re-entering the transfer portal in March 2021. The announcement arrived a month after he had committed to the Florida Gators.

This Arik Gilbert Wiki tries to reveal facts about the five-star tight end including his girlfriend, parents, and siblings. What’s more, the article highlights Arik’s net worth, height, and transfer news.

Arik Gilbert was born to his parents: Akiba Gilbert (mother) and Avis Gilbert Sr. (father). He was one of three kids born to the couple. Avis Jr. and Amila are his siblings.

When Arik was three years old, his parents divorced. Following the separation, he and his siblings began living with their mother.

Arik’s mother, Akiba raised the kids on her own while pursuing a degree and working full-time. In 2016, she received her Bachelor’s Degree from Georgia College & State University. Circa mid-90s, Akiba had enrolled in UNC Charlott. While at UNC, she played basketball and even encouraged the kids to take up sports.

However, financial constraints almost caused an end to young Arik’s footballing aspirations. Not the one to give up, Akiba looked for coaching jobs so that Arik and the siblings could play the sport for free.

Eventually, Arik got into the youth program for the Atlanta Vikings. His mother, Akiba designed the team’s website in exchange for a participation fee.

Arik and his brother, Avis Jr. were top basketball student-athletes at the Marietta High School. Following high school graduation in 2018, Avis Jr. went on to play basketball at Central Lakes College in Minnesota.

Avis Jr. and Arik welcomed their baby sister, Amila in May 2011.

As of March 2021, Arik was on Instagram and Twitter with 35k and 14k followers respectively. On the other hand, Arik enjoyed a limited presence on Facebook.

As of 2021, Arik Gilbert’s net worth remained under $100 thousand. However, with a career in the NFL ahead of him, many predicted his worth to skyrocket.

In his last year in high school, Arik was the best tight end in the country. ESPN even listed him as No. 12 on its Class of 2020 overall prospect list. Before embarking on a college football career, he clenched the title of the Gatorade Male High School Athlete of the Year.

Before leaving Marrieta High, Arik founded the school’s chapter of Whisper— “an initiative to encourage inclusion, diversity and technology-free conversations among students”.

By 9th grade, Arik had received scholarships from many schools including Alabama, Georgia, and Tennessee.

In Spring 2020, Arik enrolled at LSU. Even the Tigers coached seemed excited about the prospect of seeing him play.

On 31st January 2021, Arik entered the transfer portal and chose Florida Gators as his final destination. Barely a month later, he revealed that he was backing off from the decision. Via Twitter, Arik wrote— “I have decided to de-commit from the University of Florida and re-enter the portal. I will not be announcing my final decision until I am enrolled in school and on campus.”

Arik Gilbert’s IG featured photos either from his training or a game. As of March 2021, there weren’t posts about her girlfriend. Maybe, he wasn’t dating anyone at the time or was relishing singlehood.

That said, Arik made his intention clear via an IG caption for a Nov 2020 post by writing— “Girl if I give you time that a privilege..but I can only give my heart to the realest”.

On 6th January 2021, Arik tweeted a message for women interested in him. It read— “If you love me girl just say that… “