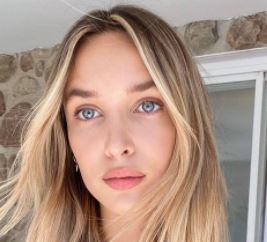 Montreal-based model, Ari Fournier is an Instagram sensation, popular for her modeling, traveling, and beauty content. But in Feb 2021, she stood in a limelight for a different reason. The lionized beauty was spotted on a date with the Riverdale star Cole Sprouse around Vancouver’s Gastown neighborhood. So, what more would fans want more than to learn about their idol’s girlfriend?

Here is everything we know about Cole Sprouse’s new girlfriend Ari Fournier, written in wiki-format.

Ari Fournier never looked lovelier than she did at the age of 22 in 2020. She celebrates her birthday on August 28 and that makes her of the Virgo zodiac.

Also, she is 6 years younger than her boyfriend Cole.

Ari Fournier was born to parents Chantal Tetreault and Robert Fournier. They were married for over 33 years and celebrated their wedding anniversary on 18th June.

Her mother, Chantal defined herself as a “horse trainer, barn owner, coach, and performance judge.” Also, she is a former model as well. Reportedly, it was her modeling agency in Montreal that first reached out to Ari and kick-started her career.

As for her siblings, Ari has an 8-year-older sister named Gabe who was married to a man named Hugo Chartier.

Trivia: Ari’s maternal grandmother is named Claudette Tetreault. She is from Montreal and was living Sainte-Julie, Quebec.

About Ari’s hometown: she hails from Montreal, Quebec. That would make her of Candian nationality. Apart from English, she is well versed in Anglais, Français and Español (idioma).

Also, Ari ran a self-titled Youtube channel where she posted all about her modeling journey, and tips and tricks on modeling, traveling, and beauty. It had over 600 followers then.

Talking about her career, Ari started modeling when she was 15. At first, she would just post random selfies over Instagram but soon she was discovered by an agency — called in, took some Polaroids, and signed. Over the two first years, she modeled part-time on weekends as she attending high school as well.

Then, after completing high school, her parents encouraged her to “give it (modeling) a year”. So, she first went on a modeling trip to China, followed by Barcelona, and she just kept on pushing.

But Ari wasn’t making much money out of just modeling. So, while she was in Italy, she was called by Asus to come to work for them in London. She immediately accepted and worked with them for about a year. And this was when things started to fall in place for her.

Finally, making her way into the US, Ari worked really hard to make her dreams come true. She shared,

“Got some better pictures on my book, got my body in shape, got my skin… You know, like everything. I was just really trying to have everything on point.”

Soon after, five agencies offered her! Rest is history.

In 2021, Ari was represented by Folio, Premier, and Elite model management.

Ari Fournier Cole Sprouse, Dating, How Did They Meet?

It was Feb 2021, when the relationship between Ari Fournier and Cole Sprouse first surfaced. However, it wasn’t clear how long have they dated or how they first met. But it couldn’t have been before Oct 2021, as Cole was dating another Canadian model named Reina Silva at the time.

Before Reina, Cole was in a relationship with his Riverdale co-star Lili Reinhart. The two dated for almost 3 years before breaking up in May 2020.

As for Ari, she seemed to have had a boyfriend before Cole as well. Though his name wasn’t shared, Ari once mentioned that he lived in LA. She shared that her boyfriend often talked about how cool living in LA was, and because of that Ari moved to LA for a while as well. At the time, she was working with Elite Model Management, NY.