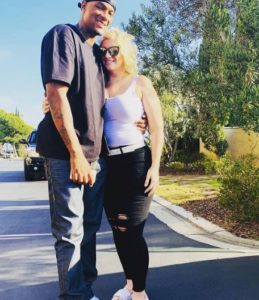 Jessica Gipson was one of the cast members of the third season of Love After Lockup that premiered on WE tv on July 17, 2021.

So, the series followed relationships of six couples (including Shavel and Quaylon) in which one-half of each couple starts behind bars, and then it tracked the “emotional journey of the prison release and life together after months or years of correspondence and supervised visits and interactions.”

Anyway, the reality show introduced Jessica and Maurice as a pair. And here’s everything you need to know about Jessica and her after-the-show dynamics with Maurice.

Jessica was 33 years of age when she starred in the show. And her connection Maurice was only 26, which made him seven years younger than Jessica.

Also, Jessica would not reveal her birthday and the zodiac sign to her audience, at the time.

So, apparently ‘Gipson’ is Jessica’s last name after she got married. Her maiden name is De Prato.

When Jessica talked to her family about her relationship with Maurice, who was at the time in prison for seven years for burglary in the first degree, they were more than hurt. Her mother broke down in tears and her father too needed some serious convincing. Not to miss, Jessica’s sister had cut all ties with her, and the two had not spoken in years.

Moving on, at the moment, no one in the media knew about her hometown. But it was obvious she lived in Las Vegas, Nevada.

Jesicca under the handle Jess was not Instagram entertaining 39.5k followers (until last day of Feb. 2021). She could also be discovered on Facebook and Twitter. In her last post on Facebook on Feb. 2, 2021, she was complaining how some dog’s barking in her neighborhood won’t let her baby sleep at night.

Naturally, after Jessica Gipson experienced motherhood for the first time, she had put on some noticeable weight. Later, she slimmed down considerably working off all the baby weight.

Jessica, who tried out all kinds of hair coloring to her otherwise blonde hair, now stands to a height of under 5′ 7″. She is fair-complexioned and her eyes are of a pretty mix of blue and hazel.

So, Jessica’s career and educational background has been kind of a mystery to everyone other than her friends and family of course. Although we knew from a trusted source that she is a marketing consultant.

Jessica and Maurice have been together for more than five years. And they married with Maurice still behind bars.

It may come as a surprise that the two tied the knot with a $2 ring and when that was happening Jessica knew she wanted a big LAs Vegas ceremony once Maurice was out of prison.

Word had it around the time, that Jessica had managed a home set up for her, Maurice, and their baby boy in Las Vegas. They welcomed their first baby together in May 2020. Maurice, meanwhile, already had a nine-year-old (last year) daughter from a previous relationship. This is also one of the many reasons why Jessica’s family was a hurdle to their outlandish romance. The aftermath of it was they had to hide their pregnancy from Jessica’s family just because they did not trust Maurice with their daughter.

Anyway, Jessica has been an elated mother continued sharing the likes of these on her socials: 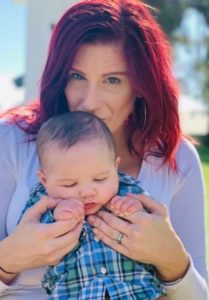 Jessica Gipson, as seen with her baby boy in November 2020 (PIC: Jessica’s FB)

“Mommy and daddy’s baby is getting so big.hes too damn smart and the best baby ever i swear!! He’s damn near ready to walk smh ,please slow down baby.his hair ia getting so curly and he might be getting dimples like his daddy and sister!!mommy and daddy love you so so so much ma’liq”

Basically, a major part of Maurice-Jessica’s story on Love After Lockup was making parents accepting of Maurice and his relationship with Jessica.

Reportedly, the couple she walked down the aisle for a second time in December 2019. And, Jessica was pregnant at the time.

Then again, how did it all began, who fell in love first?

Let us tell you. It was love at first sight for Jessica when she spotted Maurice for the first time in his profile on “Plenty of Fish”. Only later did she realized that he was in prison. But that didn’t stop her from approaching him. So, they dated for only three and Maurice proposed, and she of course said yes. They were pronounced, husband and wife in a prison ceremony soon after with Jessica having to buy her own ring.