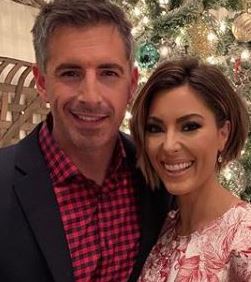 Amy Stran is best known as the amazing host of QVC. She earned prominence after people sought her advice for shopping. With her charming and captivating personality, she has left many people fixated on the home shopping channel.

To know more about Amy Stran scroll down this wiki-article which brings forth the details never known before.

Amy Stran celebrates her birthday every year on the 19th of June. In June 2020, she completed 40 years of her age moving to 41.

And corresponding to that, she secured Gemini as her zodiac sign.

Amy Stran was born to Herbert Andrew “Drew” Stran Jr. and his wife Iris Stran. While Amy lives in Philadelphia, most of her family lives in her hometown of Kingsville, Maryland.

Not only that, but there existed a fallacy that QVS’s Erin Moseley is Amy Stran’s twin sister. But, as it turned out, the pair were not even remotely related and had different birthdays.

More on her family, Anna May Stran, her grandmother sadly passed away in April 2020.

Starting with Amy’s measurements, she owned 34-25-35 inches which gave her a distinct and stunning body all good for sundresses. She mostly keeps her hair short and tucks one side of the hair behind her ears. She also got uneven highlights on her hair which further added to her incomparable beauty.

Moving on to her social media reach, Amy Stran had early earned 50.1K followers on her Instagram by Sept 2020. Likewise, her Twitter account boasted 1892 followers at the same time.

Moreover, Amy was also on Facebook where her page garnered 109,488 followers at the time of penning this wiki.

The QVC personality attended and graduated from Catawba College in North Carolina where she earned her bachelor’s degree in fine arts. Apart from that, she also enrolled at the Carver Center for Arts and Technology in her home city of Maryland.

Following the graduation, Amy went on tour with the children’s theatre group in Virginia. Eventually, she moved to New York where she spent six years working on TV and stage as an aspiring actress.

TV shows such as All My Children and One Life to Live marked as her step into the on-screen fame. And as a side job, Amy also stepped into the restaurant business.

Finally, Amy Stran arrived at QVC in 2009. As one of the fan-favorite hosts attracting huge viewership to the show, the channel must’ve paid her a handsome salary to keep her around. Though not confirmed, she makes around $48,000 annually.

Amy Stran committed herself to her husband, Steve Hydzik. The married couple met in New York where her Steve worked as a bartender in the early 2000 and later went on to become a senior associate at Citi Habitats, a NY based real estate brokerage firm.

After dating a while, Amy and Steve tied knots on 10 November 2007. The married couple shared their vows at St. Stephens Catholic Church in Amy’s home city in Maryland.

Likewise, they booked The Hilton in White Marsh for the reception. The pair proceeded to St. Lucia for their honeymoon.

After they returned back to New York, the married couple moved to Philly where Amy landed the job at QVC. Amy and husband Steve went on to have two kids: their daughter Bree born on 21 April 2014, and their son Clayton who was born on 1 November 2016.