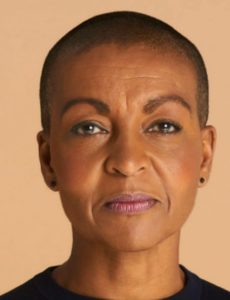 For English theatre fans, Adjoa Andoh is a familiar face since she played the lead roles in different plays at Royal Court Theatre, the National Theatre, and the Royal Shakespeare Company.

Starting her career with theatre works, Adjoa went on to grab major roles in popular TV series. She played Martha’s mother Francine Jones in two seasons of Doctor Who, Colette Griffiths in BBC’s medical drama Casualty, and BBC’s Eastenders. The versatile actress also debuted in Hollywood in 2009 with the impeccable performance in Clint Eastwood’s Invictus.

In 2020, Adjoa got a lot of attention for her role of Lady Danbury in Netflix’s period drama/regency romance, Bridgerton.

This article will cover the biography of Adjoa Andoh. From her general wikis to net worth and dating information–this wiki-article has it all.

English actress and voice artist Adjoa Andoh was born on January 14, 1963, which made her 57 years old as of December 2020. Furthermore, Adjoa’s zodiac sign was revealed to be Capricorn.

Adjoa Andoh, who is of Ghanian descent, was born to her parents in Clifton, Briston. She grew up in Wickwar, Gloucestershire with her Ghanian father, a journalist and former folk musician and English mother, a teacher.

Though the Invictus actress’s ethnicity was Ghanian, her nationality was English as of this writing. Furthermore, she had a brother named Yeofi by her side while growing up.

For education, the English actress attended Katharine Lady Berkeley’s School. Later on, she also studied law at Bristol Polytechnic but left in the middle to pursue her acting career.

Adjoa Andoh is a woman of medium stature. She stands tall at a height of 5 feet 4 inches (1.63 meters) and weighs 58 kilograms. Dark black eyes and hair are her distinct features.

For a British TV actress, Adjoa had a decent social media reach. She could be found on both Instagram and Twitter, where she had a combined following of about 8 thousand (as of Dec 2020).

Before Adjoa was a part of any movies or TV shows, she worked extensively in theatre works. Some of her theatre credits include His Dark Materials, A Streetcar Named Desire, Blood Wedding, Nights at the Circus, Purgatorio (Arcola), among others.

Adjoa made her TV debut in 1990 playing Karen in EastEnders. From 2000 to 2003, Adjao was a part of BBC’s medical drama show, Casualty. The incredible actress also appeared in Doctor Who several times.

Some of her other TV credits include Waiting For God, M.I. High, Law & Order: UK, Broadchurch, Thunderbirds Are Go, among others.

Besides an actress, Adoja was also a voice actress and received an award for narrating the audio-book version of Tea Time for the Traditionally Built.

Adjoa Andoh’s net worth was estimated to be around $2 million as of this writing.

About Adjoa Andoh Role On Bridgerton

The Netflix‘s show, which centered on two families namely The Bridgertons and The Featheringtoms, followed Daphne, the eldest daughter of the Bridgerton family as she entered Regency London’s marriage market in search of a handsome husband. 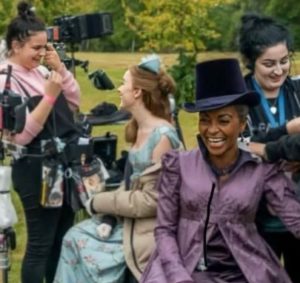 Adjoa on the set of Bridgerton.

Adjoa played Lady Danbury, a godmother to Simon Basset, the Duke of Hastings, who returned to London for a brief visit. Though Simon intended to make a brief stay in London, Adjao hoped he would marry.

Adjoa Andoh married her husband Howard Cunnell, a published author and a teacher, in March 2001. Her husband Howard stuck with her in her highs and lows. Gushing about her wonderful partner, Adjoa told,

“My partner isn’t an actor, but he’s very understanding about the whole thing. I think if you’re in a relationship and the other person is doing something that may not be ideal but that they love, then you support them.”

Adjoa had three kids, Jessie, Liam, and Daisy, with her husband Howard. Jessie, who was 24 by the time of this writing, was a teacher of English in Chile. One of Adjoa’s kids, Liam, came out as a transgender in her teenage years.

Adjoa Andoh’s husband Howard is a writing consultant and mentor at HC Writing Services. Before there, he worked as a writer at Independent Writing and Editing Professional, as a teacher at The Complete Creative Writing Course, and as a Leverhulme Research Fellow at the University of Sussex.

As Howard wrote on his LinkedIn profile, his latest novel The Painter’s Friend was released in January 2020. Some of the books and novels by Howard included Fathers and Son (2017), The Sea on Fire (2013), and The Original Scroll (2007).