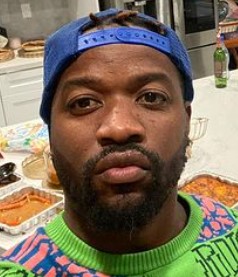 Masika Kalysha Tucker, better known as only Masika Kalysha, is a known face for all the TV fans since she appeared on We TV’s Growing Up Hip Hop: Atlanta and VH1’s Love & Hip Hop: Hollywood. In Dec 2020, Masika received a lot of attention following what looked like an engagement with her boyfriend Jamar Champ, an American author and entrepreneur.

This article will explore the biography of Masika’s now-former fiance Jamar. From his general wikis to net worth and dating life — the article has it all.

The entrepreneur Jamar Champ was reportedly born in 1989, which meant his age as of Jan 2021 was only 31. Unfortunately, there was no record of his birthday on the Internet. In the absence of his exact birthdate, his zodiac sign could not be figured out.

Born and brought up in Houston, Texas, his hometown was always endearing to Jamar Champ. Not much was known about his family except for the fact that his brother Terrick was a married guy and had a daughter.

Joe Champ, Jonalena Champ, and Deborah Champ were reportedly some members of his family.

Jamar attended North Dakota State University and the University of Houston for education.

For an entrepreneur and author, Jamar Champ boasted a huge social media reach. His Instagram profile had 114k followers by the time of this writing whereas his Twitter handles also had a decent followers count. Masika’s fiance could be found on Facebook too.

Jamar Champ stood tall at a height of 5 feet 10 inches during his sophomore year at North Dakota State University. His weight was measured as 84 kilograms in his university days. For distinct features, his body had tattoos on his arms and chest.

Before Jamar attended the University of Houston, he played wide receiver at North Dakota State University. According to his profile on the university’s website, Jamar played in nine games where he caught two passes for eight yards and returned a couple of kickoffs on an average of 26.5 yards per return.

Despite his spectacular performance in his university team, Jamar Champ never made it to the National Football League (NFL).

Besides an entrepreneur, Jamar is also an author. He wrote a self-help book called Thoughts of a Made Man and released it through Amazon in 2018.

Furthermore, Jamar is a CEO at JC Express Trucking, an organization that dealt with “industrial Fleet transporting and delivering industrial freight”, from April 2012 to May 2015.

Jamar Champ and Masika started dating each other from at least September 22, 2020. The pair were seen together partying at Compound Night Club through the club’s Instagram handle.

The adorable pair then went on a vacation. In the video shared on October 8, 2020, the model and businesswoman, Masika was seen on a boat feeding her man Jamar before sharing a kiss.

According to Masika, Jamar pursued her for over a decade. Admittedly, she always “curved” him. Credit to Jamar, he never stopped pursuing.

Jamar and Masika reportedly got engaged on December 27, 2020. The news of their engagement first became public after Masika wrote “God is so good” with a ring emoji at the end of the tweet.

The reality TV star was then seen cuddling with her fiance Jamar on her Instagram handle. Jamar also shared the news of engagement with his fans by making a now-deleted post. He wrote, ” Since she thought it was a game I married her.” 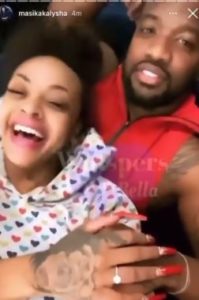 Masika and Jamar together on an Instagram story (look closely at Masika’s ring finger).

The CEO of J and R Transports further uploaded a short video of a post-celebration party where Kalysha was opening a champagne bottle on his Instagram story.

The new couple received tons of congratulations from their fans and well-wishers. One Twitter user wrote, “I love that she kept the relationship on the low. Congrats to her,” while another fan of her writing, “Everybody deserves love. Congrats”.

As much as there were happy comments, comments suggesting that the model stop criticizing Fetty Wap, the father of her 4-year old daughter Khari Barbie Maxwell, were unignorable.

The engagement between Masika and Jamar barely lasted a month. Taking to IG story, the reality star alleged that her former fiance misused her behind doors. She admittedly found a pandora’s box of findings that made her question everything about Jamar. What’s more, Masika accused him of trying to extort her. Lastly, she asked everyone to respect her privacy.