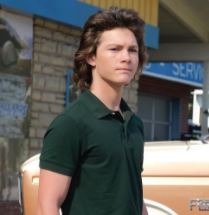 The popular actor, Montana Jordan was always an interactive kid. He played football for the Ore City Rebels, which was his school’s football team from a young age.

No doubt, his outgoing nature always had big plans for him, if he did not for himself. So, here he is, already a big star, in his teenage.

To know what movies and TV shows got him to this place, read the article further!

The teen sensation Montana Jordan reached the age of 17 on his 2020 birthday. He was born to parents, Kelli Pieratt Smith and Tony Jordan on the 8th of March 2003.

Montana has two elder siblings, Katelli Jordan and Jaden Jordan. He is the youngest and the only brother of two sisters.

Montana’s sister Katelli was 24 years of age when her brother was 17. She played softball during her days back in Ore City High School.

On the other hand, his sister Jaden is a mother to her daughter Madilyn June.

From their social media, it seems like all three siblings well-prospered in their personal and professional life.

Montana Jordan stood tall enough at the height of 5 feet 6 inches while he was just a teenager. His attractive physique appeared enchanting with that height already, although he would supposedly grow more for his age.

Besides his height, it’s his face scar that got quite an attention regarding his physical appearance.

The face scar was looked nothing more than like a birthmark. He has himself not reflected any facts regarding the scar, so his fans are unsure, whether it is a birthmark or some other mark.

Similarly, when it comes to his accent, the star himself didn’t know about his strong Texan accent. In October 2020, he wrote on his Twitter about his non-disclosure of his accent before he visited California.

Moreover, with only 59 posts, he had more than 125K people follow him on Instagram. Similarly, more than 5.3K and 5.5K people respectively liked and followed his Facebook page during November 2020.

Montana Jordan made his debut in the movies with his role-play of Jaden in the 2018 comedy-drama, The Legacy of a Whitetail Deer Hunter.

However, regarding his TV shows, Montana is widely popular for his explicit character portrayal in the 2017 spin-off of The Big Bang Theory, Young Sheldon.

As a kid, he stood ahead of about 10K kids who auditioned for a role in the movie The Legacy of a Whitetail Deer Hunter.

Within a short period of his entry into the entertainment business, actor Montana Jordan amassed around $800 thousand net worth.

There’s a category of looks people define, and the “cute” ones are often questioned about being gay.

The world is in such a space where you determine who you are and create a new category for your own. So, whether or not is Montana gay shouldn’t be a question until he openly speaks up about his sexual orientation.

Similarly, one other way for fans to know his sexual orientation is when he starts dating publicly, which is solely his choice again.

On his social media, his fans often ask him when would he start dating. Whatsoever, until November 2020 he never spoke about his real-life partner ever.

But Montana’s on-screen girlfriend Isabel May caught the eyes of his fans too. It might be because, during an interview for the 3rd season of Young Sheldon, he kept praising his co-star wholeheartedly.

Is Montana Jordan A Father? His Daughter

No, is the simple answer. Montana Montana Jordan keeps posing with his niece and posts pictures on his social media accounts.

Many people confuse her to be his daughter, but clearly, she is not. Montana seems very close to baby Madilyn, who is his sister Jaden’s daughter. 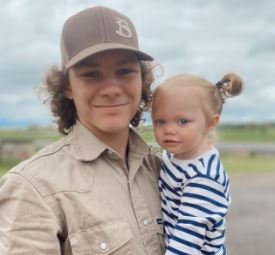 Irresolutely, some even think Madilyn is his sibling. But as asserted, she is his niece and the daughter of one of his siblings.

Sneak Into: Archie Lyndhurst Wiki: Cause Of Death, Girlfriend, Parents