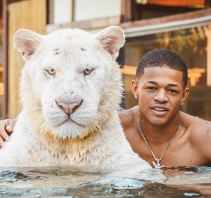 YK Osiris’ parents had named him Osiris Williams (meaning powerful in the Greek language). With seven siblings (a brother and six sisters), he comes from a large family.

YK Osiris regularly shows off his mother on Instagram. His dad, meanwhile, remains an absent figure from his social media.

Growing up, YK Osiris was exposed to all genres of music — from classic R&B to modern rap and pop sounds.

Signing with Def Jam Recordings in 2018, YK Osiris dropped his debut album titled “The Golden Child” a year later. “Fake No Mo,” “Worth It,” “Shakira” and “Mind Games” were the most notable songs from the project.

Beyond album sales and revenues from streaming services and YouTube, YK Osiris pockets a steady flow of income from ticket sales and merchandising.

According to trusted websites, YK Osiris – aka the self-proclaimed “King of R&B” – allegedly flaunts a net worth of over $650 thousand.

Nobody can deny that YK Osiris sure has come a long way. As a 13-year-old, he got arrested for shoplifting. In 2018, he faced a near-death experience after finding himself in the middle of a shootout on Highway 40 (Interstate 64).

In early-November 2019, YK Osiris’ volatile dating life made headlines for all the wrong reasons — the “Run It Up” singer was arrested after allegedly assaulting his anonymous girlfriend.

Per police reports, YK Osiris and mystery girlfriend into a verbal altercation which turned physical. The feud had ensued after the singer’s romantic partner discovered photos of women on his photo.

During the assault, YK Osiris allegedly bit his victim under the left eye. In self-defense, the mystery woman bit him back on his lips and fled the scene. The alleged incident transpired on 7th November 2019.

Arrested on the strangulation charges, YK forked out $150k for bail money. Upon his release on 9th November 2019, he proclaimed innocence and denied any wrongdoings.