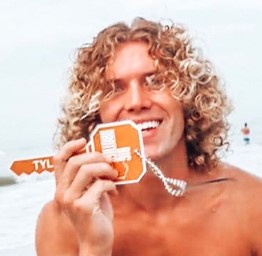 Tyler Crispen shot into popularity after he joined the 20th season of Big Brother as a contestant. The show ran from June 27, 2018, to September 26, 2018, had a total of 16 contestants (houseguests) and they competed among them for a total of 100 days.

Though Tyler seemed to have a clear chance of being the crowned champion of Big Brother 20, fans were surprised when Kaycee Clark was declared the winner. However, to Tyler’s consolation, he won the title of America’s Favorite Houseguest.

This Tyler Crispen wiki below laid out in a bio format will let you know a little more about Tyler’s life, including his wiki, net worth, and romance with Angela Rummans.

Tyler was born in 1995, thus his age as of this writing was 25. Tyler last celebrated his birthday on February 17.

Tyler Crispen was raised by his parents Charline Feltner and Donald Crispen Jr. in his hometown, which is Rossford, Ohio. Tyler’s mom is a big fan of Big Brother and she was excited when she heard her son Tyler had been invited for BB22.

Tyler’s dad passed away when he was 17 years old due to prolonged illness.

Ever since Tyler could think on his own, he was into fitness and exercises. That habit he had developed as a child ultimately helped him when he became a lifeguard.

As of September 2020, Tyler Crispen and Angela Rummans were still together.

For the most part, in Big Brother, or in any other reality TV show, things don’t work out between pair for showmances after the show is done. In Big Brother itself, Jackson Michie and Holly Allen who had a strong attachment split only after a year of dating.

However, things are entirely different in the case of Tyler Crispen and Angela Rummans, as the pair are reportedly dating each other even after two years of the completion of BB20. The romance of Tyler and Angela is a true testament to the nobility of love.

As it is all in front of us, Tyler and Angela both were not satisfied with the result of BB20. However, the things are, the pair has already risen above the feeling and in fact, they have done a lot of things together since the end of the show.

When Tyler and Angela spent more than 100 days on the house of Big Brother, they had already made Los Angeles their home. But, they soon found they could not live in Los Angeles forever.

They wanted to be somewhere–which is close to their hearts. After they did a tad bit of research, they could not find a better house than in Hilton Head, South Carolina. The pair even made a house tour video and posted it on YouTube.

Angela has a big love for Tyler. She again proved it again when she defended Tyler after a big scene broke out in the house of Big Brother 22.

The scene broke out after he went close to evicting himself from the house after which Tyler told Bayleigh that he had asked Christmas to put him as a replacement for Bayleigh in the Veto Meeting. As the meeting ended, Christmas told the story to Kevin, and he convinced Bayleigh and Da’Vonne Rogers to believe that Tyler played a trick on them. A few hours later, a fight broke out between Bayleigh, Christmas, and Da’Vonne Rogers.

What Is Tyler Crispen Net Worth?

His career as a reality TV personality started with Big Brother 20. Though Tyler could not win the coveted title of BB20, he nonetheless did not go home barehanded. He won the title of America’s Favorite Guest, and the title came with a cash prize of $25 thousand.

In the 21st season of Big Brother, Tyler returned to host the Week 2 Love Island tie-in Power of Veto Competition.

Due to the corona-virus epidemic all over the world, it was announced that it would be an “All-Stars Edition”, in which Tyler returned as a contestant.

Even though there was a thin chance of Tyler surviving the competition after the fight broke out between Bayleigh, Christmas, and Da’Vonne Rogers, people would not be surprised if goes on to win the whole competition since he has a final two alliance with Christmas.

Tyler and Angela run Tangela Inc. together, which is home to their things. From jewelry items to Angela’s cookbook to their YouTube channel, everything can be found over there.

Before Tyler joined BB20, he worked as a lifeguard. As he puts it, he always loved to be around the beach and the job paid him for what he loved.