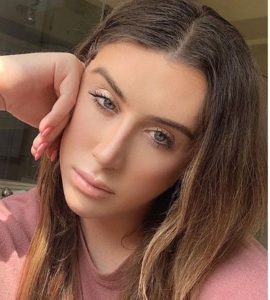 The recording artist, Trevor Moran admitted to being transgender on Jun 6, 2020. She came out of her glass closet through her Youtube video titled “Coming Out. I Am Female.”

Trevor shared that she hit a rock on her journey in 2017 when she thought she wasn’t transgender. She added, “I thought that people were pushing me to be transgender. I just had a lot of demons back then. A lot of eating disorder stuff, self-confidence issues. It wasn’t the time for me to come out back then.”

Furthermore, Trevor was already a few months in on hormones pills. She intended to share her transition in the coming docuseries on her YouTube channel.

Get to know more about Trevor Moran’s age, gender, and past surgery on this wiki styled article. Also, learn about her height and net worth as the article continues.

Before this, on Oct 9, 2015, Trevor had announced that she was gay at the age of 17. She confessed that she thought she was bisexual for a long time and was frightened by the word “gay”. Moreover, on Q&A with fans, she admitted trying to be straight and experimenting with girls. But, it just didn’t work.

Trevor Moran was born as Trevor Michael Moran on Sept 20, 1998. Making her 21 years of age when she was on the verge of transitioning from “he to she” physically.

Corresponding to her birthday, Trevor is of Libra zodiac.

Born in Poway, California, Trevor grew up in Temecula alongside her sibling. She has a brother named Blake Moran who had a self-titled Youtube channel with almost 5k subscribers.

Trevor lived in a family of four. Her parents are named Tim and Nicole Moran. Apart from this, thanks to Trevor’s fandom, his mother Nicole gained over 10K followers on Instagram.

It was at the age of 13 when Trevor first gained recognition. She auditioned for the second season of The X Factor and was loved by the judges.

You may like – Zion Kuwonu Wiki, Gay, Girlfriend, Height, Parents, Net Worth

In Dec 2016, Trevor pranked the fans with her video titled “I Got Plastic Surgery”. Later in the video, she mentioned that it was just clickbait for the Youtube algorithm.

As for her other cosmetic surgery, Trevor has gone under full LASER body removal. She documented the video under the title “getting work done, I’m sorry” dated Feb 2018.

Also, Trevor was once ridiculed for her weird belly button. Her friends mentioned that it was the scar from an intestinal surgery Trevor had when she was 8 years old.

Trevor had quite a following over social media. As of 2020, he had 1.5M followers on Instagram @trevormoran and 1.7M followers on twitter @trevimoran. Also, he had 328K followers on Facebook @Trevor Moran and flaunts 1.44M subscribers on Youtube @Trevi Moran.

Previously, she had a collaborative YouTube channel called Our2ndLife. Unfortunately, the channel had to say goodbye in January of 2015 and had earned over 3.16 million subscribers.

As a recording artist, Trevor has many songs entitle to her name. She first rose to fame with her Apple Store dance videos. Moreover, Trevor’s take on LMFAO’s “Sexy And I Know It” in The X Factor gained her the attention she deserved.

To mention some of her hit music are – Someone, The Dark Side, Echo, Steal the Show, and Sinner.

As of 2020, Trevor Moran’s net worth was estimated to be around $5 million.

Comming to Trevor’s dating life, she was rumored to be dating the singer, Ricky Dillon before 2016. While in Oct 2016, Trevor announced that she was single then through a video.

Later in Oct 2019, Trevor was seen hanging out with her “best friend” on Oahu, Hawai. Trevor had uploaded a picture to them together on Instagram asking her “bestie BFFL big ole freak” to marry her. Also, some fans have alleged they guy in the picture to her partner.

While Trevor had a lot of female fans ready to fall in love with her, her coming out as transgender surely dismayed some of them. Nevertheless, most of her fans supported her a great deal and commended her on being herself.

As of early 2020, Trevor Moran didn’t share any information on her partner.

With millions of followers across various social media platforms, Ricky Dillon is as big of an influencer as...