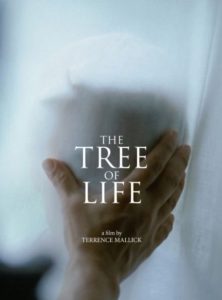 The Tree of Life is a sort of a philosophical epic directed by Terrence Mallick and it stars Brad Pitt, Jessica Chastain, and Sean Penn. Sean Penn has like three lines in the movie but that’s not really the point; the film isn’t really that dialogue-driven as you will see or if you have seen or whatever. The film is more about images and ecstasy of those images and how they relate to each other. If you have seen articles online or if you’ve seen the trailer, you know that the film is presented as an overview; it’s more about the beginning of life and the end of life and all the things in between. The film not only brings to our consciousness the questions like why are we here, things that we are always asked but also about how we develop certain tendencies as humans and how we are influenced by society. Questions like that, I think are handled very well in the film.

The story is pretty much centered around a family in the 1950s and the dad is played by Brad Pitt. He is very volatile, oppressive, and no-nonsense kind of dad and normally I’m not a fan of Brad Pitt when he does sort of straight dramatic work. For me, he was never convincing as an emotional actor. I love it when he is a physical actor; I think he’s fantastic as Tyler Durden in Fight Club or even as David Mills in Seven. But, I will have to say that in this movie, I think that he did an incredible job; in fact, this can be considered as one of his best performances to date. I think the reason me feeling detached from him as a dramatic actor really works in this instance because he’s very detached from his family which makes him very enigmatic and it’s a very clinched performance and he is seen like a very tough dad but he’s surely not a stereotypical villain. The film’s not going to simplify it that much for us. He is a dad who really loves his family and you can see that he has a very interesting way of going about family as he makes a lot of mistakes as does everyone.

But, it’s a complete juxtaposition from his wife played by Jessica Chastain. She is an ethereal, graceful, more liberated part of the story or represents that part of humanity. Brad and Jessica have sons and the story is sort of seen through the eyes of the sons or over the shoulder of the sons, I should say, particularly one of the boys. It’s wonderful because you get to see kind of the birth of all the sons in the way that is the birth of humanity. You see the innocence and the fun aspect of when you’re a child but then you start to see them developing anger and angst and violence and all of these things that, of course, inevitably happen to all of us. I really liked the way that the film developed in that way because you don’t see many typical scenes here and there in the movie; it’s more like little snapshots of moments that kind of happens. It’s like moments that you remember of your childhood nostalgia and it builds orchestrally which sometimes reminds you of some movies like 2001: A Space Odyssey. And I say orchestrally or musically because there are tons of pieces of classical music which I am a really big fan of. So, that was another thing I loved about that film.

The film, I think, is very deep and at times absolutely extraordinary. The film has been said to be very esoteric or at least from what I’ve heard something built to be very unusual, completely different from anything you’ve seen before and I don’t necessarily agree with that. To me, the film was not esoteric enough; I loved the first hour which I found wonderful and I loved the way that finally I was watching a film that was not insulting my intelligence instead it was allowing me to see these images and kind of draw my own conclusions from it. But I felt like, towards the end of the film or middle, some of the symbolism in it started to feel a little bit forced. I don’t want to say ‘cliché’ because that’s too strong a word but just a bit forced and I think you will probably see what I mean once you see the movie. But that being said, if I go see this again, I may feel completely different about it. The complaints that I have I may see them differently the second time around because it’s one of those films that if I see it again, I will form different opinions about it and that’s not a bad thing at all.

Since it is a very unique movie and I think that if you love film, you owe it to yourself to see this kind of movie because there are moments I said that is absolutely mesmerizing, extraordinary. I think that if you see it, you will have lots of opinions and questions building up in your mind to talk about and that’s really a good thing. The film is definitely a great escape from all the mess that’s going around in one’s life and the world.

7 Replies to “The Tree of Life: A Non-Spoiler Review”