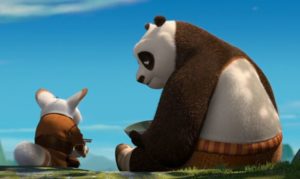 Kung Fu Panda so easily masquerades as a children’s movie—or a mindless fun fest. Take the main protagonist, for example, a goofball Panda, a blubbering idiot from the very beginning to the final scene. Take the tried and tested premise, an underdog hero suddenly morphing into a super-powerful kung fu warrior—the most clichéd premise in the history of storytelling. Take the tone of the movie: the exact opposite of ‘serious’. The movie doesn’t seem to take anything seriously, not the protagonist, not the wise dialogues, not the villain, not even itself.

But hidden beneath all that pretense, all those jokes, is a sincere story with a deep philosophical undertone. Take away the farce for a while, and one might see what a great movie it is.

While it is true that Kung Fu Panda is primarily about Po (the Kung Fu Panda), the movie can also be read as the anti-parallel stories of Po and his master Shifu, two arcs running against each other.

At the beginning of the movie Po is the clumsy oversized (compared to other animals in the movie) panda, who is living his life partly in a dream—of becoming a great Kung Fu warrior—and partly in a surrendered reality. He dreams of becoming a great warrior but makes no effort for it. He knows everything there is to know about Kung Fu (not the art but the story) but has no plan for his own life. In other words, he lacks the necessary control.

Shifu, on the other hand, is the great Kung Fu master, someone in total control of everything around him. As one can see in the scene where Shifu is first introduced, his students try to win against him but he is fast and accurate, predicting each of his students’ moves and countering them. He is in total control.

Control, or rather the sense (or illusion) of control, is the motif that binds Po and Shifu’s stories together. It is also the key philosophy of the movie, but we shall come to that later. As the story progresses, we often see this lack-of-control/full-of-control dichotomy very often: when Po tries to enter the gates of Jade Palace, when Shifu extinguishes the thousands of candles in a blink of an eye.

Things change when their paths cross when Shifu has to train Po into a Kung Fu warrior, a dragon warrior to be precise. Shifu does not believe that Po is actually a Kung Fu fighter—neither does Po for that matter—and tries to make him quit. He is so confident in his sense of control that he promises his other students that he would make Po quit. Po, on the other hand, has no idea what he is going to do. He obviously does not know any Kung Fu, and also does not have any idea how he will learn.

However, when Shifu shows him how hard Kung Fu training can be—with the intention of making him quit—he does not quit. Not because he is motivated but because he is a Kung Fu fanboy.

That is where we see for the first time, Po trying to take control of the situation and Shifu failing in that. This see-saw of control is seen numerous times throughout the movie. In the end, in the complete reversal of roles, Shifu lets go his sense of control and Po takes over the reins.

Like stated previously, the sense of control—or the illusion of it—is the prime philosophy (we’ll forget that empty dragon-scroll thing for now) of the movie. And there are two arcs pertaining to that philosophy: Po’s arc towards the control and Shifu’s arc away from it.

So, what is the point exactly? Is control good or not? Or was that philosophy just a prop to highlight the positive growth of the hero and decline of the sidekick. Fortunately, Kung Fu Panda seems to have eluded that Hollywood trope. There is a scene in the middle where Shifu and Oogway debate about the idea of the control. Shifu, obviously, is the supporter of it and Oogway opines that control is but an illusion. The following transcription may help you understand what the movie means to say about the idea of control.

OOGWAY: My old friend, the panda will never fulfill his destiny, nor you yours, until you let go of the illusion of control.

SHIFU: Illusion? (Of course, at this point Shifu does not believe that sense of control is an illusion.) 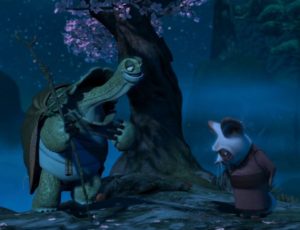 OOGWAY: Yeah. Look at this tree, Shifu. I cannot make it blossom when it suits me, nor make it bear fruit before its time.

SHIFU: But there are things we can control.

Here, Shifu kicks the tree and a peach falls to his feet and he continues to speak.

SHIFU: I can control when the fruit will fall.

A peach falls on his head (See, how the film seems to amalgamate sincerity with humor!) and Oogway chuckles. Irritated by that, Shifu angrily tosses the peach in the air, leaps up, and splits it with a chop and again continues.

SHIFU: And I can control—(Shifu punches the ground, creating a hole and places the seed in it.)—where to plant the seed. That is no illusion, Master.

OOGWAY: Ah, yes. But no matter what you do, that seed will grow to be a peach tree. You may wish for an apple or an orange, but you will get a peach.

Of course, both are right in their own way and their opinions don’t really contradict each others’. One simplistic conclusion can be that we can control a few things here and a few things there, which gives us a sense(or illusion) of control but in the grand scheme of things we ain’t got the control.

Another, a little more complicated, and perhaps a little more accurate, conclusion is that control is an elusive thing like sand slipping through our fingers when we think it is secure inside our fist; that we do not know all that much about control, how much or how little we have it.

Similar Reads: The Tree of Life: A Non-Spoiler Review

Previous: The Tree of Life: A Non-Spoiler Review
Next: Darby Camp Parents, Siblings, Net Worth, Height

3 Replies to “Kung Fu Panda: The Illusion of Control”