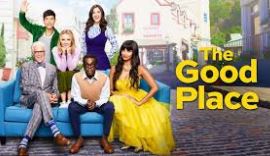 At first glance, The Good Place’s take on mortality seems simplistic. The show starts after the death of its protagonist and most of the show takes place in the afterlife (yes, there is an afterlife). With such a premise, it looks like most of the questions concerning mortality are either rendered useless or answered in a very fictitious way. Take the idea of fear of the end of one’s consciousness, and how that fear shapes human. Now, how can that question be explored in a story where the characters are already dead and death did not really end their consciousness?

Fortunately, the show has a lot of tricks under its sleeve to tackle such questions. Now, the first season primarily concerns with morality rather than mortality, the questions like what is the right thing to do?, what if one does a good deed but their motivations are corrupt?, can people change, become a good person?, if one has sinned all his life and in the end did one amazingly good dead?, etcetera, etcetera. The idea of mortality first appears in the second season, in the episode “The Existential Crises”. There is one amazing line, “…that life has an end and, therefore, our actions have meaning.”

The actual exploration of mortality comes much later, towards the very end of the fourth (and final) season of the show. All of our protagonists are in the Good Place, all of them are good people, but not all of their problems are solved. The people in the Good Place are miserable because everything they loved to do or wanted to do, has lost its importance.

Say, I wanted to eat Ortolan (google it) and because of the circumstances I never got to do it. For all my life, I wanted that thing desperately. Then, I died and reached the Good Place, and in the Good Place I could eat as much of Ortolan as I wished. I ate it once, I ate it twice, ten times, a hundred times. Since there is no limit, the value of the dish as a delicacy is gone. Same thing with the Good Place itself. It is beautiful, it grants you every wish, but there is not an end. At one point, say in a thousand years, there is nothing in it to excite.

As the “Jeremy Bearimy” (time in the afterlife) passes, people start to get bored of the happiness in the afterlife and start to leave. All the typical drama concerning death ensues. One friend is ready to leave, others aren’t. People who remain miss the people who leave, they become lonely and melancholic and nostalgic. They spent days in the memories of the past, when all were together, laughing, loving. But that does not exist anymore. Looking forward becomes extremely difficult because there is nothing but loneliness in the future, nothing but the emotional emptiness.

And for the people who leave, what lies ahead but the literal emptiness, that dark mysterious nothingness? What should one make of it? We can talk and discuss and argue and make the journey meaningful but what about the end? What is the meaning of the end? How do we reconcile with that extraordinary fear, that ultimate meaningless truth?

The guttural punch of the show comes in the finale. Before this point, the purpose of the show had always been to try and seek answers about how one should live life, what are the moral values, and the source of the answers had always been western philosophers. At one point in the finale, Eleanor is sad because Chidi (her beloved) has decided to leave the Good Place, to end his existence. She then asks him to provide some moral wisdom from Kant or Locke. Chidi, then goes on to say,

Those guys were more focused on the rules and regulations. For spiritual stuff, you gotta turn to east… Picture a wave in the ocean. You can see it, measure it, its height, the way the sunlight refracts when it passes through, and it’s there, and you can see it, you know what it is. It’s a wave. And then it crashes on the shore, and it’s gone. But the water is still there. The wave was just a—a different way the water to be, for a little while. That’s one conception of death for a Buddhist. The wave returns to the ocean, where it came from, and where it’s supposed to be.

More To Read – Portrait of a Lady on Fire: What It Means To Truly See

Marques Ray came to prominence as the one half of the sketch comedy duo “Marq N’ Park.”...