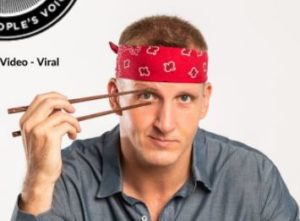 Are you are a food lover? Then Sonny Side is an inescapable face that should have popped up on your recommended feeds at least once. Yes! He is the red Bandanna guy.

The host/creator of the food review show Best Ever Food Review, Sonny has captured all our hearts with his hilarious and distinct approach to food reviewing. He takes his fans on a journey to different places and tastes, alongside his awkward antics and mouth-watering explanations. Generally, wandered through street markets and skipped fancy restaurants.

But with all the hustles and bustles, how was Sonny managing his dating life? Did he have a girlfriend, maybe a wife, waiting for him at home? Stay till the end of this wiki to learn all about it.

Corresponding to his birthday, Sonny is of Leo zodiac.

If you didn’t know, Sonny Side isn’t his real name. He was born as Will Sonbuchner in a landlocked Minnesotan town, St. Cloud.

Sonny comes from a financially struggling family. Though he didn’t talk much about his parents, Sonny shared that he grew up competing with his siblings over supper. In his words,

“The way I grew up, you ate what was affordable and easy. Every dinner had a big plate of toast, so if you didn’t get enough hot dish, you could fill up on bread.”

For his education, Sonny attended Sauk Rapids-Rice High School. But after graduating, he struggled to find his calling. He flunked out of three colleges and took unsatisfying jobs, including being a server at Applebee’s. Also, Sonny put his education in audio production to work as a DJ in the broadcasting field.

Finally, at the age of 24, Sonny realized that he wanted to explore the world and headed to Asia for roughly $2,000. Also, he credited his hometown for offering a “lack of diversity” that made him “curious enough to want to leave it.”

However, at his chubbiest, Sonny weighed around 136 kg (300lbs). He shared that he had “no balance in his life, was super unhealthy and ate instead of sleeping (due to stress)”. But he quickly lost weight as his life turned around.

His weight loss tips included “asking not how but why?” It could be “I would like to walk upstairs without breathing like a donkey” or “I want to be around for my kids.” For him, it was “I want to get laid again.”

And another important tip included, “Weigh yourself every day!”

Mentioning his distinct features, Sonny always wore a red bandanna (rarely white). It was mostly to keep the sweat from dripping down and disguise his receding hairline. Also, many claimed that he resembled Jake and Logan Paul.

As of July 2021, Sonny Side entertained 281K followers over his Instagram channel @besteverfoodreviewshow and 1.7M followers over Facebook @BestEverFoodReviewShow.

Also, be amongst his 5.5K followers at Twitter @Best Ever Food Review Show.

Previously, he also had a travel channel called “Crazy delicious” that started in early 2017 but was discontinued a year and a half later.

Sonny’s inspiration for Best Ever Food Review Show came from Anthony Bourdain’s “No Reservations” and Zimmern’s “Bizarre Foods. It was 2017 when he started that channel with a production team of around 10. And now, Sonny marked his presence amongst the food reviewers. He has even collaborated with other famous food-based YouTube stars like @migrationology and @thefoodranger.

In 2020, during the COVID-19 pandemic, Sonny was staying in Vietnam. A year later, amid the rising Corona cases in Vietnam, the YouTuber revealed they were moving the shooting operations over to the United States. Furthermore, he highlighted the next steps for their “USA Plan”.

Sonny Side is traveling all around the world, tasting the local delicacies. And from time to time, we could see the handsome host, being flirted on by the ladies. Like the time when he went to Namibia and the Himba “perfume smoke” girl looked at Sonny like she was ready to risk it all.

Also, the ladies’ man is accompanied by beautiful female co-hosts from time to time. From times when he was in Japan eating raw food with Shizuka Anderson to when he was in Vietnam with VI BI, fans could help but wish they would become his girlfriends. However, Sonny differentiated privacy strictly from professionalism.

As of 2020, there were no reports that he dated one of his co-hosts. Also, Sonny didn’t share anything about his dating life. From what it looked Sonny Side didn’t seem to have a wife. And because of his busy schedule, Sonny had yet to think about children or settling down. However, in March that year, he hinted at having a girlfriend in this YouTube video.

By 2021, Sonny Side had married. June that year, he shared a video on his secondary channel More Best Ever Food Review Show with the title “Food Challenge with My Dog! My Wife is Gonna Kill Me!” A month later, the YouTuber revealed he and his wife were moving back to the United States.