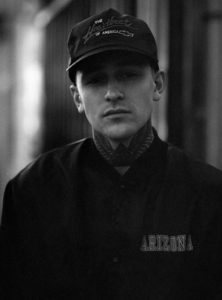 Out of many aspiring rappers who paved their way to claim the throne of mainstream hip hop, Arizona Zervas from Maryland is proving himself to be one of the top contenders.

With the song ROXANNE, which topped 1 million streams on Spotify, Arizona Zervas is on his way to becoming a household name with 31.3 million listeners on the platform as of February 2020.

Scroll through this wiki-style article that brings you the details on the professional and personal life of the beloved rapper/songwriter.

Arizona Zervas, both real and stage name, was born on 19 April 1995 in Smithsburg, Maryland. He proudly hails a Greek ethnicity.

Being on a come-up and somebody people should be turning heads to, his pursuit of career overcast shadow on his personal life. This is why details on his parents and siblings are shrouded in mystery.

But in a tweet dated on 21st February 2017, Arizona mentioned losing his father for an unnatural cause. Furthermore, he avoided going into details.

Talking about his education, Arizona attended Smithsburg High School as a kid.

Zervas with a tour of more than 50 cities in and around the United States, merchandise, and album sale, is on his way to closing the gap between his current net worth and his first million-dollar.

Plus him being signed to Columbia Records, we are rest assured that day isn’t that far.

But all these talks about fame and success without dissecting his struggle back in the day would do him a disservice.

Arizona released his trap flavored debut single Don’t Hit My Line in 2016. Following that, he went on to release over 30 singles with each almost over 1 million streams on Spotify. He released his first album as an independent artist titled Never Going Home in 2016.

In 2018, his debut EP Living Facts was released consisting of 3 songs namely Living Facts, FML, and When I Die.

In his bio on Instagram as well as Twitter, “non-fiction” is inscribed on both denoting his approach to songwriting. Every song he pens has got to do something with him one way or the other.

Inspecting all of his social media presence points toward the fact that Arizona Zervas is not in a relationship with anyone as of February 2020.

But on the contrary, back in 2017, he mentioned in his tweets about having a girlfriend. He made several tweets without giving away the names or identities of the mystery beau.

“I just seen you on the gram i’m glad you doin well.”

which gave away the fact that he had already broken up with his girlfriend as of early 2018.

On 7 April 2018, Arizona tweeted that he met a girl named Phoenix. Like most of his tweets, he didn’t bother going deep into the facts and details.

But on 13 April 2018, he hinted towards a desire to be with someone with a tweet that read,

“can’t decide whether i should get a turtle or a girlfriend.”

All these tale-tale signs are pointing toward his heart having someone as a love interest. And like most fans, we can’t wait until he decides to start dating a wife-prospect and give us names.