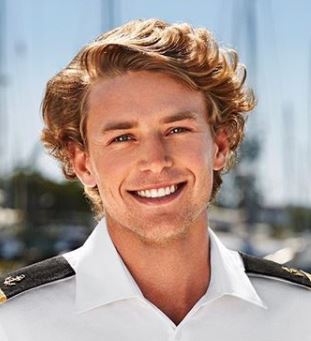 A new face, Shane Coopersmith joined the Bravo TV’s hit series Below Deck for its eight-season in November 2020. Alongside newbies like chef, Rachel Hargrove, and chief stewardess, Francesca Rubi, Shane is bound to bring dramas of his own.

Shane might be inexperienced as far as yachting is concerned, but he surely impressed the charter guests and colleagues with his endeavors. Joining in as the deckhand on My Seanna, this handsome guy might even capture some hearts on and off the ship.

Here is everything you need to know about Shane Coopersmith over this wiki.

Corresponding to his birthday, Shane is of Libra zodiac.

As for his hobbies, Shane loves surfing, camping, thrift-shopping, and spending time with his mother.

Shane Coopersmith was born to parents: Justin Coopersmith and Carol Coopersmith. His father, Justin is a professional fine artist, and mother, Carol a special education teacher.

As for his sibling, Shane has an older brother named Trevor Coopersmith who is also a model and fine artist. Besides being bothers, Shane and Trevor were also close friends. The duo was seen going on few adventures over Shane’s Instagram.

On Halloween 2020, the siblings with 2 more of their friends were dressed as the Scooby-Doo members and drove their “Mystery Machine” to Tourmaline Beach.

Growing up in hometown San Diego, Shane spent his early life in water. According to BravoTV’s bio, “he learned to swim before he could walk.” Moreover, he is a natural surfer and a talented spearfisher.

Shane loved to implement his environmentalist ideals on the people around him. And he backed it up by diving beneath the waves to catch, clean, and eat food.

With an open and honest heart, Shane hoped to change people’s opinions about their effect on the planet.

In light of his education, Shane graduated from Carlsbad High School in 2015. Later, he joined UC Berkeley (2015 – 2019) for his degree in environmental sustainability.

Also, he had a Youtube channel named “Sustainable Shane” with 76 subscribers.

Working as an actor, a model, and a reality star, Shane Coopersmith accumulated a net worth of above $450 thousand in 2020.

Just in case you are curious, a deckhand in Below Deck earned around $40-52K per annum.

Shane shared his work experience with Below Deck, he wrote,

“Sometimes I’d work until 2 am and then have to be on deck by 6 am the next morning to scrub the decks.”

Also, he once put the veteran bosun, Eddie Lucas’s patience to test with his novice manners on the boat. Reportedly, he not only jeopardized his job as a “deckhand” but also compromised the crew’s safety.

Apart from Below Deck, Shane has appeared as self in Echo Man – TikTok Ads (2019) and as a student in Think Smarter Not Harder (2020).

Talking about his modeling career, Shane worked with Stars Model Management from Jun 2014 to Aug 2018. He shared that the agency taught him how to “properly manage time and ultimately balance schooling with work.”

Apart from this, Shane also worked as a head lifeguard at Water Works Aquatics (Jan 2013 -Jun 2014); research assistant during his time at the University of California, Berkeley; lead concierge at Off-Beat guesthouse (2018), and as an intern at Latitude 33 in 2018.

And most importantly, Shane worked at the California Yacht Club in Marina Del Rey. It was where he developed an appetite for the yachting industry.

Shane Coopersmith’s was taken in 2020. He came aboard “My Seanna” with his “committed” relationship status. And the lucky girl was Aubrey Thomas.

His girlfriend, Aubrey is an “intuitive mindset coach”. She advocated for women empowerment and motivated girls to achieve bigger things in life.

Also, this clears the rumors about Shane being gay.

But, Shane didn’t share much about his girlfriend. So, it is unclear when the duo exactly started dating. However, he shares innumerable memories with her — “from snorkeling in Jamaica to gardening in the backyard to just those restful nights watching TV in bed”.

In October 2020, the lovebirds went scuba diving in Negril, Jamaica. Shane uploaded a picture of them over his Instagram and stated “somethings he loved about Aubrey”.