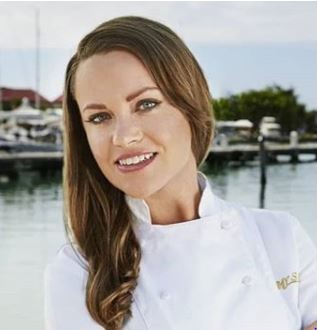 Bravo’s “Below Deck” came back for the eighth season in November 2020 and joining the cast was a mixture of new and old faces. With the return of Captain Lee and bosun Eddie Lucas, the crew also welcomed a new chef, Rachel Hargrove.

Furthermore, Rachel also joined the kitchen staff under a new chief stewardess, Francesca Rubi (who replaced Kate Chastain). Since Rachel had a good bonding with Kate, fans were excited about how things would turn out between Rachel and the new chief stew, Francesca.

Keep watching ” Below Deck” to taste the spices it holds for you. Meanwhile, learn all about its new chef, Rachel over this wiki-style article.

Corresponding to her birthday, Rachel is of the Aquarius zodiac.

On her 37th birthday, Rachel asked for donations to a nonprofit organization, No Kid Hungry. Her goal was $200 by she had gained over $500 by 2020.

Interested in cooking from an early age, Rachel is a predominantly self-taught chef. Also, she attended the Culinary Institute of America and interned at the Michelin-starred restaurant Quatro Passi in Nerano, Italy.

Other than that, she had no former training in culinary skills. Information on her academic education was unavailable.

Also, Rachel honed her craft through traveling. She has spent time in Thailand, Japan, India, and Italy.

While in India, Rachel got interested in Ayurveda and all its healing properties. Then her journey began on becoming an “Ayurvedic Nutritionist, Yoga instructor, Massage therapist” then finally “Ayurvedic Practitioner.”

“From molecular gastronomy to gluten-free pasta”, this talented chef admits that her “demanding professionalism can be polarizing to others.”

But despite what others say, Rachel is the kind of girl to stand her ground.

Mentioning her distinct features, Rachel has piercing blue eyes and a beautiful smile.

You may like – Danny Zureikat Wiki: Now, Net Worth, Wife, Heritage, Job

Bravo TV defined Rachel as “a cosmopolitan yacht chef with an extensive repertoire of culinary skills.” Moreover, she was even praised by her former costar, Kate Chastain saying,

“She is so intelligent. You guys are gonna love her. She’s hilarious, extremely talented.”

Rachel and Kate worked together before on a yacht back in 2013. They seemed to have formed a bond enough to joke about the jobs they did together. Reportedly, they even watched the first season of Below Deck together when it aired in 2013 from the yacht where they were working.

During the episode aired in mid-Dec 2020, Rachel quit Below Deck because of COVID. Baffled by the lack of seriousness to the pandemic amongst the crew and the guests, she left for home. Unsurprisingly, Rachel was furious at the US’s response to the pandemic.

But Below Deck wasn’t her first time on the screen. Rachel previously appeared on America’s Next Top Model, auditioning for Tyra Banks in “The Girl Who Is A Lady Kat” in 2005.

Also, there was one time when Rachel made a guest appearance on a Japanese TV. She was shown learning to make sushi then.

While we may see Rachel appreciating arts, traveling, and cooking, did she have someone special to do it with?

In October 2020, Rachel Hargrove was living in a new apartment in Italy and it was unclear if she had a husband or a boyfriend with her. Though fans believed that she might be dating someone, Rachel herself had yet to speak on the matter.

Also, with “boatmances” on the way, Rachel might have kept herself available, just in case. Below Deck crew are no new to hookups on the sea. Names like “Kelley Johnson and Jennice Ontiveros”, “Raquel Dakota and Eddie Lucas”, and “Conrad Empson and Hannah Ferrier”, are some romances we could never forget.