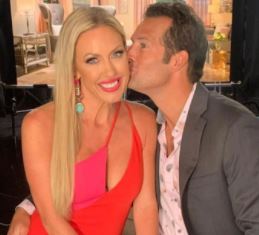 During fall 2020, The Real Housewives of Orange County star, Braunwyn Windham-Burke, and her husband, Sean Burke had decided to live separately. The duo shared that they were “not following the old, antiquated rules anymore” and “redefining what marriage meant” to them.

Furthermore, Bronwyn confessed that “there were no other men” in her life.

So, who is Braunwyn’s husband that she loved dearly and trusted enough to try out the “modern marriage”? Divulge into the world of Sean Burke over this wiki!

Corresponding to his birthday, Sean is a Cancer.

Sean Burke lived in Newport Beach, CA, and before moving there he resided in Newport Coast CA, and Miami FL which might be his hometown.

Trivia: Sean is a kind-hearted person. He was volunteering as the “foundation board member and technology” for the Orange Country School of Arts since Sept 2017.

Mentioning his distinct features, Sean has blue eyes. Also, he has a unique dressing sense and also sometimes liked to wear eyeliner.

“Big life! Dad to Seven. Never a dull moment, and many more adventures to come.”

On the 21st October 2020 episode of RHOC, Braunwyn explained that Sean was the breadwinner of the family. Unable to pinpoint the job, Braunwyn added,

According to Sean, he is the president and founder of Channelstars that was established in 2009. The company is located in Newport Beach, CA and it assisted other companies in “strategic planning, marketing, virtual and physical blended environments, content, and video development.”

Furthermore, Sean is also the president of Kalotech and Califonia Green Information Technology (CGIT) in 2020; both for over 10 years.

Apart from this, he was the advisory board member of FAMEOS in 2020.

Before that, Sean was the owner and board of directors of Govplace for 15 years.

He even became the prime contractor for the Department of Homeland Security, S&T from 2006 – 2007.

As for his education, Sean completed his Bachelor of Economics from UC Santa Barbra in 1991 – 1996.

Sean Burke seemed to have known Braunwyn Windham before 1994. Reportedly, the duo met while Braunwyn attending college in Santa Barbara. However, it is not clear how they started dating.

Married in Jan 2000, the couple celebrated their 19th wedding anniversary in 2019. To celebrate the milestone, Sean and Braunwyn managed a timeout to enjoy the sunset by the seashore.

Did u know that Braunwyn had a drinking problem? On their trip to Miami, Braunwyn wouldn’t stop drinking and she kept drinking for straight four days. Fortunately, Sean was there to intervene. He told her,

“If you have one more drink, you’re going to go to rehab.”

And that was how she came back to track.

Sharing many ups and downs, Sean and Braunwyn raised their seven kids over time. From the smallest, they are Hazel, Koa, twins Caden and Curran, and Jacob, Rowan, and Bella.

In 2019, the Burke family was planning to move back to Orange County because the three oldest kids had to attend Orange County School of the Arts.

However, with Sean moving out of the house, it was unclear what their next gameplan was. Many were dubious that their “modern marriage”  might be heading for the path of divorce.

As of January 2021, Sean Burke wasn’t dating anyone.

In December 2020, Braunwyn came out as a lesbian. In her revealing interview with GLAAD, she insisted she and Sean weren’t divorcing. What’s more, she claimed he knew of her girlfriend, Kris.

Although she was dating Kris, Braunwyn claimed she will be heartbroken if he moved on. Asked if they were in an open marriage in January 2021, she replied they were best friends. The RHOC cast, meanwhile, sided with Sean Burke calling him a saint and selfless person.

During the RHOC reunion aired in late-Jan 2021, Braunwyn admitted she never found Sean attractive. Sean, for his part, expressed relief admitting that was something that couldn’t be fixed.