Home EntertainmentBraunwyn Windham-Burke Girlfriend Kris: Who Is She?

Braunwyn Windham-Burke Girlfriend Kris: Who Is She? 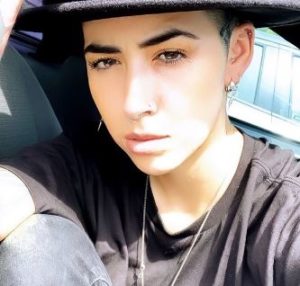 In October 2020, The Real Housewives of Orange County (RHOC) revealed that she was trying to figure out the deep-seated feeling that was bubbling about her sexuality. Not long after, she went on to reveal and accept that she was gay.

Plus, Braunwyn went on her Instagram account to reveal a give glimpse of her new girlfriend on her IG story. We’ve dug a few pieces of information on Braunwyn’s girlfriend Kris, so scroll down to learn more about her.

Braunwyn Windham-Burke & Kris: Dating, How Did They Meet?

Before coming out as gay, Braunwyn Windham-Burke married Sean Burke. The couple met each other in college in Santa Barbara. Following that, the couple decided to tie knots eventually.

In January 2000, 23 years old Braunwyn at the time accepted Sean as her husband in a beautiful wedding. The couple lived happily in various cities and went on having seven kids together: Bella, Rowan, Jacob, Caden, Curren, Koa, and Hazel.

Married for 20 years, Braunwyn discussed exploring her sexuality at the age of 42 in October 2020. She, however, didn’t reveal whether she was bisexual or lesbian, at first.

As People reported, Braunwyn met Kris at a time when she was puzzled because of her emotions which her girlfriend helped explore. The RHOC reality star revealed her girlfriend in an Instagram story but didn’t confirm she was Kris.

Furthermore, Kris played a key role in helping Braunwyn confirm her sexuality. Additionally, the source confirmed to People Braunwyn found a match in her girlfriend who she started dating about a month ago as of this writing.

In mid-April 2021, the news about Braunwyn and her girlfriend, Kris breaking up surfaced. A source PEOPLE Magazine, the couple separated in March. The insider also revealed Kris wanted more commitment from Braunwyn who couldn’t.  Despite the split, they remained on friendly terms.

What Does Braunwyn Windham-Burke Make Of Their Romance?

With a little support and direction from Kris, Braunwyn proudly came out as gay, including herself to the LGBTQ community. Dating for just a few months and she already introduced her to her kids and her husband, Sean.

The fact that Braunwyn made the huge decision to introduce Kris to her family established the fact that the romance between the two is serious and not just a bliss of her newfound self.

However, Braunwyn talked very little about the relationship and had yet to share details on their dating status. Plus, the reality star never revealed how she and Kris got acquainted with each other.

But we can expect the details to make headlines in no time. Braunwyn went on her Instagram to address her interview with GLAAD where she revealed her sexuality. She captioned the post with,

“It feels so good to finally be living my truth. I am a lesbian. At 43 years old, I’ve finally been able to accept this part of myself and I’ve realized there are no rules about when someone should come out. This is my time. Thank you @GLAAD for the support and for the interview. I’m proud to be a member of the LGBTQ+ community 🌈 Click the link in my bio to watch the interview portion 💕”

As for the fans, they went on Instagram to show love and support for Braunwyn for accepting herself.
Mor From Us: Swaggy Jazzy Bio: Casanova Wife, Best Friend Star, Age

Besides the name, we don’t have any information on Braunwyn’s girlfriend, Kris. But if the girl on her Instagram story is Kris, then she has an Instagram account. But even that platform didn’t give away any details on her.

Going by her looks, Kris appears to be in her mid-’20s if not early ’30s. Even though she never revealed her job, she hinted at a few of her interests on the platform.

As her IG suggested, she loves tattoos and piercings. She has pierced both of her ears, her nose, and her lower lips. On top of that, she inked multiple tattoos all over her body and usually dressed in a tomboy fashion.

As for Braunwyn, she happily celebrated her 43rd birthday on 25 November 2020 and owned Taurus as her birthday. As for the job, she turned into a lifestyle blogger until she starred in The Real Housewives of Orange County in 2018.

Surprisingly, among the people Kris followered on her Instagram, Braunwyn is one of them proving that the girl who starred on Braunwyn’s IG story is none other than Kris.

Disappointingly, due to Kris’s private nature, tracking down her Instagram became a tough task to complete.

0 Replies to “Braunwyn Windham-Burke Girlfriend Kris: Who Is She?”