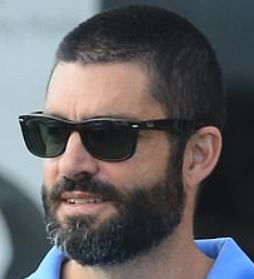 The long-time girlfriend of Jeffery Epstein, the sex offender, Ghislaine might or might not be complicit in all the crimes he committed. That is an ongoing case and the police and court will get to the truth of it. But it seems like Ghislaine is already married to someone else, a businessman named Scott Borgerson.

In this article, you will find out who Scott Borgerson is and how he met Ghislaine. Also find out more about his first wife as well as his age, net worth, height, etc over this Scott Borgerson Wikipedia!

Scott Borgerson was born on 3 September 1975. He was 45 years of his age as of June 2021. And because he celebrated his birthday every year on the 3rd of September, his zodiac sign was Virgo.

Scott Borgerson was born to parents: Chris Borgerson and Sara Borgerson. Chris, his father (72 years of age in 2021), was a former Marine infantry officer. Sara, his mother (now deceased at the age of 74), was a high school French and Spanish teacher. Scott had had a religious childhood in his hometown in Missouri. With his parents, he traveled 15 miles every week to attend Grace Presbyterian Church.

Scott did not have a very good relationship with his parents. His mother had died on 3 May 2021. About a decade before her death, Scott’s mother had divorced his father. And since then, Scott was also estranged from his father. In fact, he did not even inform his father of his marriage to Ghislaine Maxwell.

In the interview with Daily Mail, Chris expressed his surprise at his son’s marriage. He also mentioned that he was hurt that Scott had not thought it wise to at least inform him.

Scott Borgerson stands at a tall height of just a tad bit over 6 ft. Other than a tall height, Scott has dark hair and brown eyes. He also has a rather handsome face with a wide chin and high cheekbones.

We could not find Scott Borgerson on Instagram. It seems Scott was not a very keen social media user. He was present on Facebook but he was not very active there was well. The last post on his Facebook dates back to 2006.

Scott Borgerson has a reported net worth of more than $30 million.

In 2010, Scott Borgerson founded CargoMetrics, a maritime analytics company that was valued at $100 million in 2016. The investors of the company include former Google CEO, Eric Schmidt. CargoMetrics has raised over $23 million from its investors. Scott was the CEO of the company until 2020 when he stepped down from his position.

Before embarking on his journey as a tech entrepreneur, Scott was briefly a presbyterian priest. For his education, he attended US Coast Guard Academy as well as Tuft University’s Fletcher School of Law and Diplomacy. He got his Bachelor’s degree from the US Coast Guard Academy. He obtained his Masters in Law and Diplomacy (2003) and his Ph.D. in International Relations (2006) from Fletcher.

The Scott Borgerson-Ghislaine Maxwell saga is as interesting as it is confusing. Ghislaine was associated for a long time with Jefferey Epstein. However, when she was arrested in July 2020, during a bail hearing, she revealed that she was married to someone other than Jeffery but declined to reveal her spouse’s identity.

Scott, on the other hand, outright denied being married to Ghislaine. When Daily Mail reported that Ghislaine was actually hiding in Scott’s oceanfront property (worth $3 million) in Manchester-by-the-Sea, a small town near Boston in Massachusetts, Scott said that Ghislaine was only a former friend.

Apparently, Scott was spotted walking Ghislaine’s dog. However, Scott maintained that it was his own dog and not Ghislaine’s. There were also reports from the “friends” that it was indeed Scott whom Ghislaine was married to.

Whether Scott is indeed Ghislaine’s husband or not, they certainly knew each other very well. They first met in 2012 when Ghislaine founded Terramar Project, an oceanic conservation organization, and she was invited to Reykjavik to speak at the Arctic Circle convention. Scott was himself a very ardent Arctic conservationist.

There was no news of any kids between Scott and Ghislaine. However, Scott did have kids from his previous marriage.

Before his relationship with Ghislaine, Scott Borgerson was married to a woman called Rebecca Borgerson, his first wife. Rebecca was a human resource consultant and has worked as a caregiver to an Alzheimer’s patient.

According to Daily Mail, Scott and Rebecca got married in May 2002 in Palm Beach, Florida. Scott and his first wife had two kids together: Noah, who was 14 years of age, and a daughter, 10 years of age. We do not know the name of the daughter.

Scott Borgerson and his first wife, Rebecca had a fraught relationship throughout their marriage. Scott was an abusive and controlling husband. Apparently, he also had alcohol problems. He was not a very good father either. Once, when his daughter was only three, he called her “fat”.

Scott’s behavior in the household caused problems for his kids. His son started to hurt himself and his daughter started to wet the bed. Rebecca had to send the kids to therapy.

Eventually, in 2014, Scott was accused of assault and domestic battery by his first wife, Rebecca. Soon enough, she filed for divorce, which was finalized in December 2015.