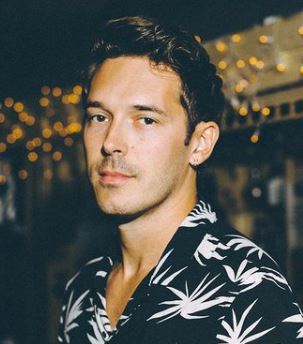 With back-to-back news about the Nashville star, Sam Palladio appearing on two most awaited shows, fans were unable to contain their excitement.

Sam was returning as Prince Edward of Belgravia on Netflix’s The Princess Switch: Switched Again and at the same time he was appearing on the ABC drama series, Rebel, inspired by the life of activist Erin Brockovich.

So, while we may know Sam through many characters he portrays, what about his real life? Stay till the end of this article and learn all about him.

Corresponding to his birthday, Sam is of Scorpio.

Born and raised in Pembury, Kent, England, Sam comes from a family of artists. Both of his parents, Kim and Sally as well as his sibling, Mac Scott were artists.

You can find his younger brother Mac Scott over Instagram @macscott1 where he often exhibited his creativity.

Unfortunately, Sam’s mother passed away on November 28, 2018. Her funeral was held at All Saints church in Marazion on Friday 14th of December. He recalled her as a woman “full of compassion, love, color, and light.” Also, he added,

“Her smile and laugh were incredibly infectious and her heart was open to everyone.”

What Is Sam Palladio Net Worth?

Sam Palladio’s net worth was estimated to be around $1.4 million.

Being an actor and a singer/songwriter, Sam has engraved his name in the entertainment industry. Though he first came to the limelight from his role as Gunnar Scott in the ABC series Nashville, Sam is credited to few other movies and TV shows. Listing some of them are:

Talking about his musical career, Sam was involved with the British folk band Salt Water Thief. He released a single “Under the Tree” in Nov 2020 and has collaborated with Clare Bowen on songs like “Fade Into You”, “If I Didn’t Know Better” and “When The Right One Comes Along”.

As for his education, Sam trained in theater and music at Rose Bruford Drama College, Sidcup, London.

Who Is Sam Palladio Wife, Girlfriend?

Cassadee Pope, though she might not be Sam Palladio’s wife as of 2020, they were slowing getting there.

After being friends for years, Sam and Cassadee started dating in late 2017. However, they let their fans know the good news later in March 2018.

The duo shared their first date was a walk to the dog park during which they “hit it off!” Also, at the time Cassadee had just split with her 8-long-years boyfriend/fiancee, Rian Dawson for over five months, and there appeared Sam with a shoulder to lean on.

Also, during the 2020 quarantine, Cassadee shared that Sam helped her work through the abandonment issues. She mentioned that she “definitely need human connections to feel normal,” and with Sam there, he was “everything” she needed “to feel safe and content.”

Though Sam and his girlfriend both are musicians, they struggled to write songs together. So, they chose to work alongside another writer instead of one another.

“We tried writing together just the two of us, but we kind of got stuck on an idea, and it wasn’t completely working. And then we both got hungry.”

However, Cassadee also shared that was thinking of bringing Sam into one of her next projects. It seems like we will soon be hearing the lovebird’s collaboration music.

Before his girlfriend Cassadee Pope, Sam was dating the American actress and singer, Chloe Bennet. Their relationship ended in August 2013 after almost a year of togetherness.

Little info about Sam Palladio’s wife prospect: Cassadee Pope was the winner of NBC’s The Voice season 3. Also, her debut album, Frame By Frame, charted at #9 on the Billboard 200.