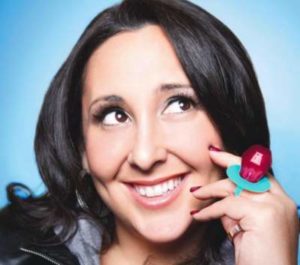 Even the pandemic did not stop New York standup comic Robyn Schall from spreading spread joy.

Robyn is a regular in the New York standup comedy scene and an international headliner who is on the rise especially after her video “My 2020 Goal List Is Trolling Me” went viral and was seen by millions.

Here are all things you need to know about her.

Robyn Schall Family, Where Is She From?

Robyn Schall hails from her hometown of Long Island, and she has the accent to prove it.

Roby’s brother, (Richard) Richie has been her greatest fan since day one. Richie missed her first show, but saw the video and could not stop laughing. He had just relocated to Hewlett from Los Angeles where he was a casting editor for game shows. Richie thus offered to be her manager. (Just so you know, Richie describes his sexual orientation as gay).

As a child, Robyn Schall had Perthes Disease and wore leg braces. She had five hip surgeries. So her childhood was basically spent in and out of hospitals. As a consequence of these, she was so immobile, by the time she hit 19, she weighed over 200 lbs.

She then spent two years losing 85 lbs. And have kept her weight so for more than 13 years. Reports claim Robyn Schall now weighed 115 pounds in her height of 4′ 11″.

Robyn Schall is greatly occupied on social media. It is in fact the social media that made her big of a name in the business.

Best known as a ‘TikTok star’, Robyn managed 87.6K followers on TikTok, 142K on Instagram, 12.7K on Twitter and almost 8K on her Facebook handle. Also, you may catch her perform in her distinct and hilarious characters on her self-titled YouTube channel where she entertained 3.79K subscribers, at the time of this writing.

Earlier this year, she asked her followers to donate money so that she could contribute a “giant pandemic Valentine” to those in need.

Later, she studied (BFA) Theatre at the University of Connecticut from 2002 to 2006. Following graduation, she realized that with her weight, dating, and family life journey she had some really funny stories to share with the world. So she attempted to stand up comedy.

And while she was trying to make it as a comedian, Robyn also never left her job as a personal trainer for many years.

Over the course, Robyn has performed all over the world including South Korea, Japan, Germany, Jordan, Bahrain, Netherlands, Kuwait, Belgium, Kosovo, Australia, and England.

Viewers saw her on TV shows Gotham Live, Wendy Williams Show, Bethanny Show, Raising McCain, The Little Couple, The List, among others. After four episodes of The List, she was appointed to be a writer for the sketch comedy show Edge and Christian Show.

Robyn had not worked since March 2020. She had been isolated in her New York home during the pandemic in grieving the death of her grandmother earlier in the year. On a certain day, after hitting “rock bottom, she grabbed a bottle of wine, shot a video of herself reading her goals list for 2020. This very video received approval from the likes of Jennifer Garner, Drew Barrymore, Oprah Winfrey, Kourtney and Khloé Kardashian, and more.

Ever since Robyn’s life has not been the same. Companies reached out wanting to partner with her, and after months, she picky-ly chose Sunwink, a female-founded wellness brand selling all plant-based products.

This way, the supremely health-conscious Robyn Schall collected over $500K net worth as her career kicked into high gear. At that point, she was already charging the likes of £2 to £51 to her subscribers on Cameo and Patreon.

So, Robyn Schall was happily dating her new boyfriend, Franklin as of 2021.

On Sep. 2, 2020, on a video “I HAVE A NEW BOYFRIEND” posted on her YouTube channel, she opened up for the first time about her new man.

A month later, she actually featured him on her video titled “INTERVIEW WITH FRANKLIN”. Throughout the video, her boyfriend with the name Franklin wore a Batman mask. Further on it, they shared how the two met in Periscope, an American live video streaming app.

Back in March 2020, the Not the Sharpest Crayon host clarified in a tweet that she was not quarantined with Franklin, instead, it was a long-distance romance they were having and the boyfriend continued living back in San Diego.

Robyn also briefly mentioned her ex and their awful breakup.