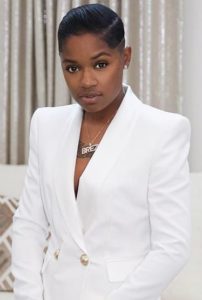 Bre-Z is an American rapper turned actress who is best known for portraying Tamila ‘Coop’ Cooper in the TV show All American. The multifaceted talent has made quite a name for herself starring in several other TV shows. In addition to that, she and her mystery beau created quite a buzz posting a valentine day special pictures.

This wiki-style article is an attempt to bring for all the known details on her professional endeavor, personal life, and her dating status, so delve in.

Bre-Z was born on 22 July of 1987 with the real name Calesha Murray in Philadelphia, PA. She turned 32 years old while celebrating her birthday in 2019. As per the birth date of Bre-Z, she is a Cancer by her zodiac sign.

Even though Bre-Z was born in Philly, she along with her parents moved to Wilmington, Delaware.

She was born to David Mayfield, a barber by trade and her Wutang-lover mother Carla as Calesha Murray. However, she got the moniker Bre-Z from her grandmother.

As the lore goes: After Bre-Z’s birth, she was feeling cold. And she took that name even in her school days writing it on her notebook.

As for siblings, Bre-Z has a brother whose details are obscure as of the end of March 2020. The family are generational barbers. The same skill she had inherited from her father.

Growing up in a household where hip hop was the main staple genre for the consumption of music, Bre-Z grew up listening to 2-Pac, Jay-Z, Cam’ron, Missy Elliot, MC Lyte, and Jadakiss.

The more Bre-Z put hip hop records on spin, the more of her was fascinated towards the word-play, production, braggadocious bars.

Consequently, Bre-Z picked up the skill of writing songs herself and by the age of 10, she was already performing in stages. She had recorded a few singles which happened to catch the attention of Roc-A-Fella rapper Freeway.

Bre-Z’s ‘TRillest‘ is one of her hit records which has over one million views on YouTube. Similarly, Red Bottom My Bitch, Best Of Me are some of her popular songs to date. She released her self-titled 12-track EP in 2018.

Later on, she released her debut album The GRL on 27 July 2018. The 12-track album was released under the record label WHOISBREZ MUSIC, LLC.

Following that, Bre-Z released her sophomore album Full Circle on 28 February 2020 under the same record label. As of March 2020, her eponymous YouTube channel has over 42K subscribers.

Following her family-trade of giving haircuts might have been one of the best decisions Bre-Z had ever made in her life.

When she moved to Atlanta with her mother, Bre-Z became a celebrity barber giving cuts to entertainment industry vets such as Akon and Ludacris.

Later on, Bre-Z relocated to Los Angeles to establish her career in music. But LA, being a hub for aspiring actors and actresses, she wanted to try her luck submitting her original songs for the show but ended up auditioning for Hip Hop based TV show named Empire (2015-2019). She ended up landing the role of Freda Gatz/Freda Gates in the show.

Bre-Z is also set to appear in 16 Bars (2020) in the role of Taj which at the time of penning the article was under post-production.

Bre-Z stands at a height of 5 feet 5 inches (1.65 meters) with a bodyweight of 54 kilograms (119 lbs). She dons a short hair giving her a tom-boy look, an appealing look for a female rapper if you ask me.

After Bre-Z’s appearance on two of the hottest shows in the American TV shows industry, her fan following grew exponentially over the years.

The rapper/actress has a verified Facebook account through which she keeps in touch with her friends. The page has over 422k likes and 583k followings worldwide.

As of Spring 2020, Bre-Z was in a Lesbian relationship with her make-up artist girlfriend Chris Amore. The couple first appeared together on Instagram on 3 October 2019.

Even though the rapper/actress didn’t write anything, giving the context to the picture but the post was speaking for itself. And it was loud and clear she was dating her esthetician partner. 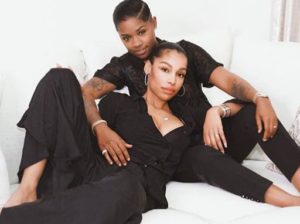 Bre-Z and her girlfriend Chris together on February 14, 2020 (Pic: Bre-Z’s Instagram)

On 14 February, Bre-Z and partner Chris updated their fans that they were still going strong as ever by taking it to the Instagram.

But, Bre-Z’S words WERE proving to be quite enigmatic for some as she had claimed in an interview with Sesali Bowen from nylon.com that she wanted to keep her sexuality to herself.

But nearly 8 months later, Bre-Z flaunted her beautiful girlfriend over and over.