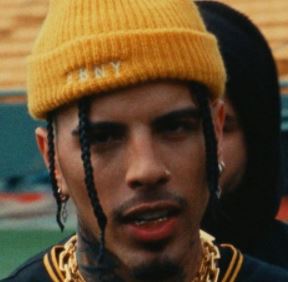 Proving his versatility once again, Rauw Alejandro appeared on the 2020 Latin Grammys’ opening, singing the chorus for Héctor Lavoe’s “El Cantante.” His salsa performance alongside reggaeton pro, Ivy Queen, was appreciated by everyone in the hall, and not to say, by all of his fans.

But while we heard plenty about his dancing skills and feats, what was going on with his love life? Is he married? Stay till the end to get all the answers.

Rauw Alejandro was 28 years old in 2021. He celebrates his birthday on Jan 11 and is of the Capricorn zodiac.

Rauw Alejandro inherits the love for music from his parents María Nelly and Raul Alejandro. His father, Raul was a guitar player and vocalist, and his mother María was a choir singer.

He recalls, “My family has always worked hard. They’re workaholics.” It seems that Rauw’s father moved to Florida when he was just 10, and he was raised mostly by his mother. Also, he shared that she worked three jobs at the same — “She’s the real deal.”

Coming from a middle-class family, Rauw was raised alongside his sister. The siblings both grew up to be dancers.

Now that Rauw is up with the stars, he wishes to give his mom a “good life”. He sharted that he paid all of her debts and the reason he is here now, was just for his mom!

Apart from his parents, Rauw also inherits the love for music from his grandparents. Reportedly, they were musicians as well who performed traditional Puerto Rican jibaro music.

If you didn’t know: Rauw’s real name Raúl Alejandro Ocasio Ruiz and hails from Carolina, Puerto Rico. He lived in the US for a while (as a child) and returned to his hometown later.

Rauw Alejandro stacked a net worth of $2 million until 2021. And he loved to splurge it! Rauw confessed he liked buying “stupid stuff” — “Sometime I’m on Amazon or eBay and I buy electronic stuff, studio stuff. And I love sneakers a lot. Nike is one of my favorite brands.”

The R&B/reggaetón artist, Rauw first came to the spotlight after being featured on the remix of the 2016 Alex Rose song “Toda.” However, he claimed international limelight through his collaborative songs like “El Efecto” with Chencho, and “Tattoo Remix” with Camilo. A.

In November 2020, he then finally released his first studio-length album, Afrodisíaco.

If Rauw hadn’t chosen a musical career then he might have been a professional soccer player now. Growing up, he always dreamed of playing in the big leagues. He even made it to a semi-pro league in the U.S. But then his journey had to stop as he suffered a major injury.

Even now Rauw is a big soccer fan. He shared that his favorite player was Cristiano Ronaldo.

Is Rauw Alejandro Married? Is Rosalia His Girlfriend?

Coming straight to the point, No, Rauw Alejand wasn’t married as of 2021. As for his girlfriend, Rosalia seems to be the person he was dating. However, Rauw hadn’t confirmed the romance himself (as of early 2021).

Rauw and his rumored girlfriend, Rosalia, were allegedly dating since March 2020. According to some “eagle-eyed” fans, they spotted Rauw’s car several times in Rosalia’s pictures. Moreover, they believed that the duo posted individual photos from the same house, and shared the same clothes as well.

As for as speculation goes, fans also wondered if Rosalia’s collaboration with Rauw on “Dile a El,” was solely professional or if the two had something more going on. Rauw’s perspective on the collaboration stated,

“I had a chance to work with Rosalía, who came in and did her thing and went into the production side. In the end, it was such a great team and a great song.”

Since both of them practiced privacy in their dating life, we aren’t sure if Rosalia was ever Rauw’s girlfriend.

Before her alleged romance with Rauw, Rosalia was confirmed to be dating the  Puerto Rican rapper, Bad Bunny. The two went official over IG in early 2020, which was a little before Rosalia was spotted getting cozy with Rauw.

A little info on Rosalia: She is a year younger than Rauw, and hails from Barcelona, Spain. A singer/songwriter by profession, Rosalia met stardom after releasing her singles “Con Altura” that featured J Balvin and El Guincho, and “Yo x Ti, Tú x Mi” that featured Ozuna. Also, she appeared in the talent TV show “Tú Sí que Vales” and was eliminated early on.