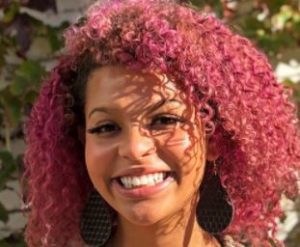 American Idol season 19 is here! And the contestants this season each carry their own emotional story. The self-proclaimed “tallest girl in Perryville, Ky.”, Alyssa Wray shared that being a tall Black girl in her small town made her stand out. But she didn’t let people’s disparage stop her from reaching for her stars. Instead, she turned differences into her “superpower”.

Keep reading this Alyssa Wray wiki to learn everything about the young American Idol hopeful.

As per her birthday, Alyssa is of the Aries zodiac.

The small-town girl, Alyssa Wray lived in Perryville, Ky. with her step-father and mother, Chad and Tabitha Blackwell. Her stepdad worked as a massage therapist, and after Alyssa rose to the limelight, his clients would come in and praise his daughter. He was a proud father indeed.

As for Alyssa’s mother, Tabitha worked at a massage center as well. Moreover, she also attended the same school as Chad i.e. Boyle County High School. No wonder Tabitha fell in love with Chad. Apart from this, she was always supportive of Alyssa (as you can guess seeing her come running in after Alyssa won the golden ticket). According to Alyssa, her mom was her “rock”. She shared that her mother would always talk to her about her “insecurity and nervousness.”

Information about Alyssa’s biological father wasn’t shared. All we know is that he was gone a long time ago, and Alyssa’s mom married Chad in May 2011.

Talking about Alyssa’s siblings, she has at least 3 brothers and sisters. We say “at least” because her mother shared that she was a mother of “4 children” (including her). But Alyssa once mentioned a “baby brother” over her IG named Kaeden “Pittman”.

Trivia: Alyssa has a grandmother named Tamra Bryant Blackwell, who attended Boyle County High School as well. It seems like the school was pretty popular, or that was the only one in Perryville.

Mentioning her distinct features, aside from her tall stature, Alyssa’s pink curled hair gave a different vibe. Also, she sometimes straightened it or sometimes put it into braids.

About Alyssa stepped on to the audition sinning Jennifer Hudson’s version of the song “I Am Changing” from “Dreamgirls”, and the judges were on their feet even before she even finished.

To the outstanding performance, each judge made high praise — Lionel Richie tagged her as a “once-in-a-generation” talent, Katy Perry touched her make up because she wanted to “look best” when that moment went “down in the history”, and Luke Bryan remarked, “You just saw Beyoncé get born.”

Finally, they handed her the golden ticket to Hollywood.

This was Alyssa’s second try at the American Idol, and she made it with a bang. Previously, she auditioned for the show when she was in the first year of high school but couldn’t make it past the first round.

As of early 2021, Alyssa Wray’s net worth was under $100 thousand and she had yet to release any of her original music. It goes without saying that Alyssa will soon be writing her own songs. Meanwhile, she was focused on winning the American Idol. The last we saw her, she was teamed up with Alex Miller.

Talking more about her career, Alyssa has been singing and watching American Idol ever since she was a kid. She started her journey by being a part of the church choir and later moving on to the musical theater. Some of the musicals she acted upon were Elsa in Frozen, Sister Act, Little Shop of Horrors, Shrek, and Elf.

In light of her education, Alyssa graduated from Boyle County High School in 2020 and was pursuing her musical theater degree at Northern Kentucky University in 2021.

Did u know: Alyssa was a basketball player during her high school days. She shared that her family couldn’t afford her basketball uniforms, so her community helped them get them.

Alyssa Wray labeled herself as a “rom-com enthusiast”. So, it would be no wonder that she was dating someone. Though she didn’t share her boyfriend’s name as of early 2021, we are sure he will come into the light anytime soon.

The last we checked on her, Alyssa spent her prom night 2019 with Will Imfeld. It was unclear about the relationship they shared. But just one look at the duo’s pictures, we could see that they were pretty close.