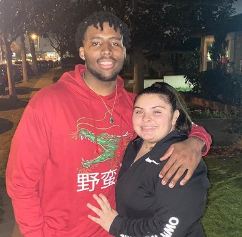 KJ Allen is another face of Netflix’s Last Chance U: Basketball, who commands attention. With the show gaining popularity, we are intrigued to know more about the life of KJ Allen and his, girlfriend, family, and height. Scroll down to learn more about him with this KJ Allen wiki.

Where Is The Last Chance U: Basketball’s KJ Allen Now?

KJ Allen was prepared and committed to join USC as of March 2021. However, he is one grateful guy who thanked all of the people who helped him in the process that he trusted and kept pursuing. His IG posts thanked everyone that included his family, friends, and coaches to help him motivate to perform better.

Allen also interviewed with TrojanSports where he shared the reason for picking USC over the universities. Talking about his reason to commit to USC, he shared,

“Those schools are great, but I felt USC can help me expand my basketball game and have a shot at a championship.”

Plus, he felt that to be able to play for your own city and have family and friends watch him play was a great feeling. Plus, KJ was still dating his girlfriend Kloe.

KJ Allen, full name Kaelen Allen, was born to his father Damieon Allen and his mother Tajuana Mallard in his hometown of Monterey Park, California, the United States.

His father hailed from Los Angeles, California. Damieon attended Crenshaw Senior High. Furthermore, Damieon worked as a mail handler at US Postal Service. Also, he founded and served as the CEO of Fontana 210 Warriors. As for the basketball career, he worked as an assistant varsity coach at South Hills High School.

Whereas, his mother, Tajuana worked as a behavior specialist and para educator in Los Angeles.

Talking about his physical attributes, KJ Allen stands tall at a height of 6 feet 6 inches (1.98 meters). Furthermore, he weighed about 102 kilograms (225 lbs).

Moreover, Kaelen is a tall, dark, and handsome man who inherited his good looks from his father. Plus, he kept short locs and grows his facial hair.

Talking about social media reach, his Instagram account earned a total of 1964 followers in total. He only posted 9 times in total as of March 2021. Likewise, he was also on Twitter with 312 followers and 8 tweets in total. However, KJ was nowhere to be found on Facebook.

KJ Allen attended Westchester High School. While in school, he earned the title of Los Angeles High School Player of the Year. Even though he performed very well on the basketball court, KJ didn’t perform well in school. He scored 2.2 GPA and ended up in the East Los Angeles College (ELAC).

But a lover of basketball flows through his vein. Having a father who had set skills with basketball, KJ picked up the ball when he was only three and hasn’t stopped ever since. Though he had the potential as a player to crack his ways into several colleges known as the top in basketball, his grades pulled him down from making it into Division I programs.

But, KJ bettered himself in education and since he is set to graduate in 2022, he verbally committed to the University of Southern California in November 2020. KJ will be joining the team for the 2021-2022 roster.

KJ was recruited by Jason Hart for joining USC. But before that, he was offered to join by Washington State Cougars, TCU Horned Frogs, Oregon State Beavers, SMU Mustangs, Loyola Marymount Lions, New Mexico State Aggies, and a few others.

Talking about KJ’s stats, he averaged 18.5 points on 68.9 percent shooting and 9.3 rebounds for a 29-1ELAC team last season. He committed to USC along with Malik Thomas, Reese Dixon, Harrison Hornery, and Kobe Johnson.

As for the net worth, KJ Allen is on his way to make the first 1 million.

As of 2021, KJ Allen was still in a relationship with a woman named Soriano whose real name is Kloe Gutierrez. While almost nothing is known about her, Soriano appears to be of Hispanic heritage. She appeared on KJ’s Instagram account on 23 March 2020, on her 19th birthday.

As KJ revealed, a friend introduced them to one another. In his words:

“Happy 19th birthday love 🎂 🎉u make me a better person. I’m so glad to have you in my life, u always find a way to make me laugh. I’m lucky to have you by my side ❤️💍”

The lovers seemed cute together and caught the attention of KJ’s fans on his socials. Nothing was known about his relationship and its origin. Soriano also has a sister named Val whose Instagram account is private at the time.