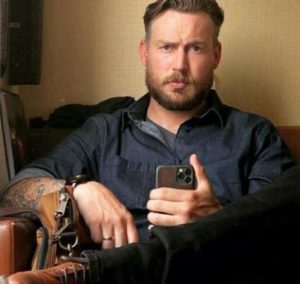 Viewers on the History channel’s Forged in Fire have been aware of Grady Powell as the show’s new host since the release of the eighth season on Nov. 18, 2020. Before him, the series was anchored by Wil Willis all through its first seven seasons.

So, here is this Grady Powell wiki comprising everything from net worth and family background to married life intel about the popular TV host.

Grady Powell continued to live in his born and bred hometown of St. Louis, Missouri.

As a middle child born to his parents, Grady grew up alongside his two siblings Tyler and Wesley (both brothers). His brother Wesley is a musician.

Grady’s mother is named Judy and all one could tell about his father, Bob Powell, is that it was actually following his footsteps that Grady became a Green Beret.

While his father was a Green Beret during the Vietnam war, his grandfather, also with a military background, served in the 11th Airborne Division during WWII.

Grady seems to have a big thing for caps. He is rarely seen without one. Otherwise, his natural hair is golden brown. He mostly kept it short and also sported medium to a short stubble.

Known to the world first as a Green Beret and later as a reality television personality, As of March 2021. Grady Powell has 21.6k followers on Instagram, 24k followers on Facebook and another 10.4k on his Twitter page.

Grady, living by the motto “You only get one chance to write your story, make it one worth reading”, has done it all. He is a former U.S. Army Green Beret and Senior Detachment Weapons Sergeant who as part of his job toured in Iraq and Northern Africa.

Grady passed selection as a Green Beret only as a 22-year-old and this makes him among some of the youngest soldiers to have made it into the elite brotherhood of Special Forces Operators. Apparently, he had abandoned his ‘full-ride scholarship’ to the University of Missouri, Columbia (Mizzou) to be in the army.

Anyway, after serving with distinction in the Army for five years, he left in January 2012 and decided to spend the next few months backpacking through countries. This was when he was invited to partake in a Portuguese Cell Service Provider’s television commercial. And, thus began Grady’s career in entertainment.

Shortly, Grady was called upon by the Metal Flowers Media to participate in NBC’s Stars Earn Stripes. Who would have thought he alongside his partner Eva Torres would take home the winning prize. During 2013, he also competed in a survival race for National Geographic’s Ultimate Survival Alaska.

And from the late-2020 onwards, Grady landed on an even larger platform of Forged in Fire. The show is basically a three-round elimination contest to forge bladed weapons, with the winner earning a $10K cash prize and the show’s championship title “Forged in Fire Champion”.

So, with a previous two seasons experience of starring on Dual Survival on The Discovery Channel, Grady embarked on a new journey as a host in the game show.

Meanwhile, for his net worth, the multifaceted and audacious Grady Powell was said to have hoarded plus $1 million fortune, before the time of this writing.

Grady Powell’s Instagram itself is proof of his beautiful romance with wife Meg (Meyer) Powell. Together since at least 2017, the couple has been married since November 2019. They exchanged their vows with family and friends present at Boulders Carefree in Scottsdale, Arizona.

On July 13, 2020, when the world was immersed in the COVID-19 agony, Grady dropped on his Instagram a baby announcement.

“COVID-19 isn’t ALL that bad. Coming to you Jan 21’ lil’P. @megmpowell is going to be the best mom you could ask for and I couldn’t feel more blessed than we do right now. Our weeks are filled with weird videos, and even weirder cravings. We can’t wait to meet you lil’P. We love you, beyond words, we love you.”

With Meg by his side and wearing a T-shirt that read “MAMA”, Grady carried an infant singlet with a big bold “BABE” imprinted on it.

So, just as promised the baby daddy during the very first ‘we are expecting’ news, Meg gave birth to a healthy baby boy on Jan. 25, 2021. They named the young one Nash Lewis Powell.

In February 2020, before heading back to CT to film the upcoming season of Forged in Fire, Grady shared this one of many dreamy family portraits with his wife and son on Instagram. To which he added a beautiful caption that read:

“I am going to absolutely miss these two beyond words…But these are sacrifices I will always make for my family and our future. Nash is in the best of hands with his beautiful momma, @megmpowell. I will be counting down the minutes until you guys make the long trip up north.” 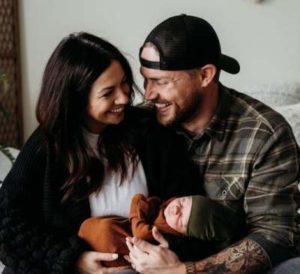