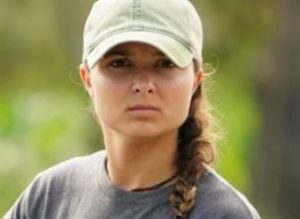 The new season of Swamp People aired on History on February 4th, 2021 and it featured a new face, Pickle Wheat.

While the crew based at the Atchafalaya River Basin, Louisiana, as usual, came across challenges while hunting reptiles, there appeared Pickle showcasing her skills. It seems that she has a long history with gater hunting and her second-to-none skills came grafted with her blood.

Keep reading this bio to learn all about her.

As per her birthday, Pickle is of Virgo zodiac.

Pickle Wheat, whose real name is Cheyenne Wheat, was raised in her hometown Poydras, Louisiana.

She inherited the hunting talent from her family who comes from a line of alligator hunters. Her great grandfather was one of the original alligator hunters in St. Bernard Parish. Also, she credited her father for teaching her profound skills. Reportedly, he took her hunting ever since she could walk.

Talking more about her family, Pickle’s parents Eddie and Missie Wheat were married in Aug 1992. Her mother, Missie is from Saint Bernard, Louisiana, where she spent most of her life.

Also, Pickle has a brother named James Wheat. He lived in Chalmette, Louisiana, and attended Chalmette High School. As of 2021, his relationship status was “single”, or at least, that was what his FB profile mentioned.

Trivia: James has a gifted country voice and could strum his guitar while he sang.

As of Feb 2020, Pickle entertained over 800 followers on her Instagram. She often posted pictures from her adventures and only a few family photos. Also, she didn’t seem to be much active then. Her last post was from 2019.

Find Pickle on Facebook under her real name “Cheyenne Wheat”. She filled her FB with pictures of her hunt. It seems that Pickle was more of a Fb girl. She was more active over it.

She joined Swamp People for season 12 of its franchise in 2021. Featured on the first episode, Pickle was one of the new alligator hunters alongside familiar faces like Troy and Jacob Landry, Willie Edwards, Terral Evans, Daniel, and Joey Edgar, Chase Landry, and another new face, Ashley Jones.

Reportedly, the Swamp People crew earned around $25,000 per episode.

Apart from the show, Pickle helped in the family business making duck and turkey calls. Their company was named Wheats Custom Calls (Gun Shop), co-owned by her dad and mom. Also, her brother was involved in the business as well.

Pickle Wheat was dating her co-star Chase Landry in 2021.

One look at her social media, and we could see that the two were in a relationship at least since October 2020. Past that date, Chase was featured a few times over her FB posts.

Over one of her posts, Pickle wrote that she was “better” when hunting in the woods with boyfriend Chase and her brother Eddie Wheat.

Chase, who was 31 then, is older than Pickle.

The reality star, Chase Landry is popular for appearing alongside the rest of his family in Swamp People. His father is the show’s star, Troy Landry. Also, his brothers Brandon and Jacob were quite popular on the show.

Unlike Pickle, Chase is quite a sensation over social media as well. He had over $40K followers in IG as of 2021.

Did you know: before dating Pickle, Chase was married to Chelsea Kinsey. They lived in Louisiana and share a kid named Riley (born on March 18, 2017).