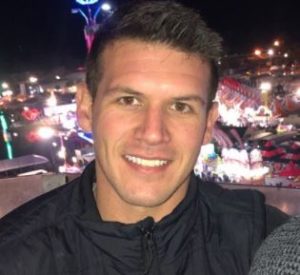 After almost two years of keeping her baby-daddy in the dark, Madison shared a rare picture of him at her salon in Jan 2021. She uploaded a video of him getting a haircut captioned, “When your ex-husband still trusts you with their hair.”

Soon, recognized as Josh Hughes, Madison’s long mystery ex-husband caught the fan’s attention. So, here we are, shedding light on Josh’s private life over this wiki.

His birthday wasn’t shared. Thus, his zodiac couldn’t be established either.

Josh Hughes was raised in his hometown Charleston, South Carolina.

Talking about his family, Josh’s father remained anonymous while his mother is named Leah Hughes. His brother, Matt was born on August 15, 1992, and attended First Baptist School. He later served the Marine Corps.

Trivia: Matt was a member of the Hurricanes’ swimming program in highschool. He was a two-time South Carolina State Champion in 50- and 100-yard freestyle.

As for Josh’s education, he went to Bishop England High School and later attended the College of Charleston from 2008 to 2012 for his degree in Exercise Physiology.

Mentioning his distinct features, Josh has brown eyes and loved to keep his hair short. Also, he is blessed with an intimidating body.

Also, Josh was present on Facebook. Most of his photos featured him along with his cute son.

Josh Hughes was working as the “regional director of agent recruitment” at Senior Benefit Services for almost 2 years in 2021. He wrote that his job was to help “career agents succeed in the senior market.”

Before that, Josh was the “director of sales and business development” at Hylo Fitness for 3 years. Also, he served as “regional director of operations” at Orangetheory Fitness for over 5 years.

It seems that Josh stepped into the fitness industry as well. Considering his passion for physical activities, Josh made a wise decision, building his career as a fitness instructor.

Just in case you are curious, a recruitment director’s salary in the US was around $89K per annum.

However, their son Hudson kept the two in touch. Coparents, Josh and Madison, both confessed how their son has changed their life for the better. In Madison’s words,

“Having Hudson has definitely pushed me to want to be successful.”

While Josh took it to his FB to write,

“Being a father has been, without a doubt, my greatest source of achievement, pride, and inspiration.”

Furthermore, Josh is a hands-on father. He included Hudson in on most of his fun times — bike rides, sporting events or just hitting the beach.

Trivia: Madison hoped for a boy while she was pregnant.

As of Feb 2021, Josh Hughes was single, or at least that was what his FB relationship status mentioned.

He seemed busy being a good dad and didn’t seem to have a dating record. However, on the other hand, Madison’s relationship with her co-star, Austen Kroll was making a buzz over Southern Charm. They have been in an on-and-off relationship multiple times.

Also, Madison was rumored to be linked with former Austen Kroll and a former MLB star Alex Rodgriguez, the fiancee of Jennifer Lopez.