In recent times, the video gaming industry has taken off like a rocket and e-sports and gamers are becoming almost as popular as actual sports and sportsmen. And one of those gamers with ever-increasing popularity is OMGitsfirefoxx.

Read the article below to know more about OMGitsfirefoxx: her real name, a short bio, net worth, and also boyfriend-information.

OMGitsfirefoxx’s real name is Sonja Reid and was born in Toronto, Canada on 12 February 1991, which made her almost 29 years of age by the beginning of 2020.

Not much is known to the public about Sonja’s family or her background, except that she studied computer programming and is also a software programmer apart from a gamer.

Before becoming a full-time gamer, Sonja was working in the retail sector. However, when she started to gain popularity as a gamer, she quit her job and started to focus solely on video gaming.

OMGitsfirefoxx used both Youtube and Twitch (a video-game streaming social site) to stream her gameplay. In Twitch alone, she had garnered over 750k subscribers (Jan 2020), making her the most popular female gamer in the world.

In her Youtube channel, she started to upload other kinds of contents like vlogs and interviews apart from gameplays. Her popularity in Youtube was no less than that of her in Twitch, with about 745k subscribers by the end of 2019.

One of the indicators of how influential Sonja was within the gaming community was the fact that she was included in Forbes’ 30 under 30 list in 2016.

In 2020, Sonja’s net worth was estimated to be well over 1 million mark.

Sonja is quite short for an average Canadian woman, standing at the height of 5 ft 3 inches.

Towards 2017, the rumors had started that Sonja was dating a guy called Nick Sanchez, which turned out to be true.

Nick Sanchez was indeed Sonja’s new boyfriend. The couple was seen together several times after that, especially in Sonja’s Instagram. 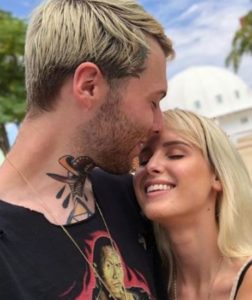 Sonja Reid (OMGitsfirefoxx) with her boyfriend circa 2019 (source: Sonja’s IG)

Before Nick, Sonja had another boyfriend with whom she was very deeply involved. Her ex-boyfriend was Tucker Boner, another Youtuber, and social media personality. Sonja was so into Tucker that she moved to the US with him.

However, they couldn’t last long and in the year 2016 parted their ways, although quite amicably.

The history, however, didn’t seem to repeat with Nick Sanchez. And whispers of Nick soon turning into her husband had started to surface. That is to be seen!