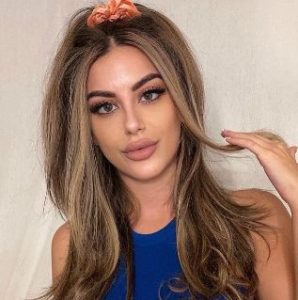 Nivine Jay went viral on TikTok after she posted a video of herself turning down actor Ben Affleck on Raya. Immediately after, Ben responded with a video by sliding into Nivine’s DM and posting a video. Ever since then, Ben has was criticized for being a creep but the social media influencer defended the actor. So, who is Nivine Jay?

Delve into this Nivine Jay Bio to learn about the social media star.

The viral moment of Nivine Jay occurred when she shared a video of actor Ben Affleck pursuing her on Instagram after she rejected him on Raya, a dating app. This launched her to new stardom of fame.

Nivine turned down Ben on Raya after she thought Ben’s profile on the app was fake. However, Gone Girl actor pursued her on Instagram and sent her a video. In the video, Ben asked her: “Nivine, why did you unmatch me? It’s Me”

Later, Nivine posted the video on her TikTok which gathered 1.1 million likes for the videos and 7.4 million views as of this writing on 5.5.2021.

Nivine Jay turned 28 years old in 2020. She will be celebrating her 29th birthday on 31st May 2021. Based on that information, Nivine Jay secured Gemini as her zodiac sign.

Nivine Jay, whose real name the last name is yet to be revealed, was born to a Lebanese father and mother. She proudly spoke of her father being protective. One story she shared about her father on her Instagram read:

“My pops. He once found out I went on a date to Olive Garden so he took my phone called every boy that was saved in it and in his thick accent said “WHERE YOU WAS LAST NIGHT?!” Got so frustrated and smashed my phone against a wall and then drove me to get another one the next morning. I get my passion from you. My big eyes. My even bigger heart. Oh also we share the same paranoia that my mom is out to get us. Also the same ability to turn a small story into an elaborate tale. You never held me enough as a child and now you won’t stop texting me emojis. You’re my best friend.”

That’s all that we know about her father. Almost no details surfaced regarding her mother.

Coming to her siblings, Nivine grew up with her elder sister Nour and her brother Mahmoud. Nour is private about her life and keeps her social media private. She is also a model who appeared in a music video by WhoHurtYou titled Wish We Never Met. Talking about her brother, Mahmoud is in a relationship with @Kahshaaa.

All of Nivine Jay and her siblings are of Lebanese-American ethnicity.

According to Nivine Jay, she has yet to undergo breast-enlargement plastic surgery. She also tattooed a few words on her body which is one other feature. Took talk precisely of her curves, she boldly flaunts her 36-26-36 inches measurements. Whereas, her 5′ 6″ height added more to her good looks.

One of many attractive qualities of Nivine, besides her personality, is her gorgeous appearance. All thanks to her parents, good-looking parents, her Lebanese heritage made her look extremely desirable.

Nivine Jay didn’t seem to be on Twitter. In the same way, she was also on Instagram with 29.3k followers where she posted 258 times as of early May 2021.

The California resident is also on Facebook but not very active on the platform. However, it seemed she is more invested in TikTok. Her profile earned 44k followers. Her TikToks garnered 1.2 million likes for the videos.

Before Nivine Jay made headlines from a stint with Ben Affleck, she already set out be establish a career in entertainment. This contributed to her net worth that totaled about $150 thousand.

Nivine Jay is a lady with many talents. She is an actress, model, author, and standup comedian. Starting with her gigs as a comedian, she performed in a club in an open mic. Her YouTube channel shelter a video of her performing on stage which dated in 2013.

Her material was revolved around dissing ex-boyfriends, prostitution, and date rape, admiring women for manipulating men to pay for drinkings and meals. She performed the comedy gig in Leche Lounge in July of 2013.

In the same gig, Nivine also addressed working as a waitress and sleeping with her boss. Admittedly, she got fired after commenting on his penis. Her business card described her as a comedian/pervert/cake lover.

As for her acting gigs, she starred in the 2014 movie The Donut Split and another Space Juice which will be released in 2021. As a model, she also appeared in a music video of a single titled Disco. She showed off her boobs covered with little square pieces that looked like mirrors.

She also took her shot to become a fitness instructor for a Doritos commercial.

Moreover, Nivine is a budding author. She published a book titled Cry Baby. The book documented the “five stages of grief, after heartbreak”. She posted about the availability of the book on her Facebook in early March 2018.

Nivine Jay Boyfriend: Is She Dating Anyone?

Without a doubt, Nivine Jay had plenty of men who wanted to make her theirs. She addressed some of them, in her standup and others in her book. But, Nivine never gave away the precise details regarding her boyfriends.

Her social hold information about going on a date to Universal Studios who she didn’t like at all. Nivine also talked about being single coming out of a fresh breakup with her former boyfriend in May of 2017.

Nivine’s social media suggested she might be single when the incident happened with Ben Affleck. In conclusion, there existed no hints on her dating status.