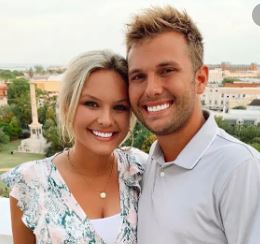 Scroll down to learn more about the racer, his girlfriend, net worth, and family background.

Both the renowned personalities owned Pisces as their zodiac sign.

Nikita Mazepin was born to Minsk-based Russian billionaire Dmitry Mazepin and his wife Mrs. Mazepin. His Dad is the majority shareholder in Uralchem Integrated Chemicals Company.

More on his family, Nikita’s granddad on his mom’s side worked as a director of the Perm Mineral Fertilizer Plant. Allegedly, Nikita grew up with at least two siblings. However, he never revealed details on them.

Moving on, Nikita Mazepin soars at a height of 5 feet 9.5 inches (1.76 meters) whereas he weighed almost 69 kilograms (152 lbs) as listed in his athlete profile.

Moreover, Nikita has a big forehead with a high hairline. Plus, his strong jawline and V-shaped face made him much more popular with women.

Talking about social media reach, Nikita has already built quite an impressive following as of this writing. His Instagram account earned him 96.7k followers in total and also earned him a verified account.

As Nikita Mazepin’s business website remarked, he first got behind the wheel at the age of 7. And ever since then, nothing was stopping him from becoming a Formula 1 driver.

Over the years, Nikita progressed and made his single-seater debut in 2014. Throughout his career. he impressed fans of speed sports with his skills behind the wheels.

In 2014, Nikita debuted with MRF Challenge Formula 2000. He raced for J.A. Motorsports while driving Dallara Formulino Pro of Renault where he stood 10th.

He went on to participate in events such as Toyota Racing Series, Formula Renault 2.0 Eurocup, FIA European Formula 3 Championship, GP3 series, and a few other series or classes.

In 2020, Nikita drove for the title for Formula 2 until the final round in Bahrain. Disappointingly, he couldn’t secure the title but grabbed the attention of the Formula 1 paddock.

Nikita signed a deal with American team Haas and went on to become a fourth Russian Formula 1 driver. But along with a thriving career, several controversies surrounding his career surfaced throughout the year.

Back in 2016, Nikita punched Callum Ilott when the latter got in the way of a run on new tires. They briefly argued which led to Nikita punching Callum.

Several eye-witnesses reported, Nikita got out and approached Callum and attacked him twice leaving him with a swollen jaw and a black eye.

He was also accused of throwing a party in the Moscow Secret Room Club without care during an accident in a mine in Solikamsk.

As for the net worth, Nikita Mazepin will inherit hundreds of millions from his billionaire father.

Nikita Mazepin has been spotted with several women throughout the year. However, who he dated in the past remains a mystery for many.

Of all the relationships he has ever been in, Nikita’s relationship with Angelica Anderson caught everyone’s attention. The pair were spotted together on different events embracing each other.

Moreover, Nikita Mazepin’s alleged girlfriend Angelica is an Instagram model with 1 million followers and is the founder of Anderson Wear. She caught the attention of people all over the world with her good looks.

However, it remains a mystery whether Nikita was dating Anderson when he harassed a woman in December 2020. He reached out from the passenger seat of a car and groped an unidentified woman sitting in the back seat.

To which the woman responded with a middle finger and covered the camera.

After backlashes that arose, Nikita publicly apologized for his immature behavior. Surprisingly, the lady who was groped also came to his save claiming they were good friends and he wouldn’t hurt her, and nothing from that video was serious at all.