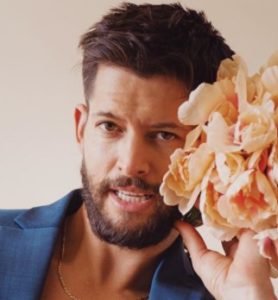 The host of Netflix‘s Suger Rush, Hunter March, continues to redefine the term “host” in the show’s new season with his feisty yet engaging hosting.

Aside from Suger Rush, Hunter is one of the hosts in E! Network‘s late-night talk show Nightly Pop. The incredible host presents his fun and candid commentary on some of the hottest entertainment stories, alongside the show’s other hosts Morgan Stewart and Nina Parker.

This article will be about Hunter March, who got started in his career as a YouTuber. From his general wikis to net worth and wife — the wiki-style article covers everything about Suger Rush‘s host.

TV Host and YouTuber Hunter was born in the year 1991, which meant his age was 29 years old as of November 2020. Ever since Hunter was born, he’s been celebrating his birthday on the 5th of April which makes him an Aries.

Thanks to the support from Hunter’s family members, he has proved to the world how incredible of a host he is. Hunter March was born to his dad, Jeffrey March, and mom in California.

Although Hunter’s parents are separated from each other, he is very close to both of them. He uploaded a picture with his mom, whose name remains a mystery, on Instagram on May 11.

Hunter has 5 siblings in total. He has his own brother named Dylan, three older step-brothers, and a step-sister.

Hunter’s dad Jeffrey celebrated his last birthday on February 5, 2020. Wishing him happy birthday, Hunter Instagrammed a picture with his dad and brother and captioned it:

‘Happy birthday to my dad. He’s the strongest man I know, but every year he’s getting weaker, and eventually, I’ll be able to kick his ass.’

Executive producer Hunter is the grandson of late Hal March, who’s popular for hosting the $64,000 question— a game show that ran from 1955 to 1958. That means Hunter being so good at hosting is obviously not a coincidence.

Everyone has the right to look beautiful with whatever means available. Similarly, YouTube OG Hunter March also filled his two missing teeth with fake teeth. All thanks to the incredible dentist, it’s almost impossible to distinguish the fake teeth from the real ones.

Coming to his physical features, Hunter March stands very tall at a height of around 6 feet 1 inch. Furthermore, he weighs under 83 kilograms.

For a TV host, Hunter has an incredible social media presence. As of November 2020, Hunter is available only on Instagram and Twitter.

How Much Is Hunter March Net Worth?

Hunter March, who works days and nights, certainly makes a huge dough. He is estimated to have made a net worth of $3 million as of this writing.

Hunter found why he was sent to the earth at a young age. That is why he did not complete his undergrad. He joined a community college in 2010 but did not make it past general classes.

The same year, Hunter created a YouTube channel. Hunter posted vlogs, fun challenges videos, or a walkthrough of his normal day on his YouTube channel. Although Hunter has not posted anything in the last three years, 370 thousand subscribers of the channel badly want Hunter to make a comeback.

From 2012, Hunter slowly started to get popular in the market after he joined Awesomeness TV as an intern. However, Hunter was quickly promoted to the position of a production assistant. As of November 2020, Hunter works as a host and executive producer at Awesomeness TV.

From February 2017 to February 2018, Hunter worked as a television host in Game Show Network’s game show, Emogenius. Since July 2018, Hunter has been working as a host in Netflix‘s Sugar Rush whereas it’s been 2 years and 3 months after California native joined E! Nightly Pop.

Besides being a host and television personality, Hunter is an author too. He authored a self-help book called TBH: 51 True Story Collabs.

Who Is Hunter March Wife?

Coming to Hunter’s personal life, it is not straightforward as his commentary in Nightly Pop is.

The multitalented personality Hunter March was dating Lex Lee a couple of years ago. For people who are unaware of who Lex is, she is a furniture and interior designer. She also has her eponymous YouTube channel where she talks about life, furniture designs, and everything in between.

Hunter has an ample amount of pictures together with the brunette beauty. On December 25, 2015, Hunter’s mom posted a picture of Hunter, his then-girlfriend Lex, and Hunter’s brother. She captioned the photo: ‘Cutie Patooties.’ 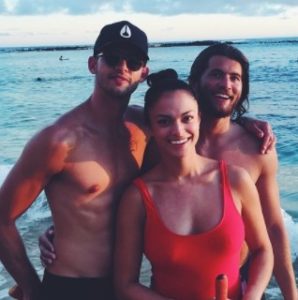 Hunter, his girlfriend Lex, and his brother Dylan enjoying summer at the beach.

On July 15, 2017, Hunter Instagrammed a picture with Lex while promoting the Game Show Network series Emogenius. The photo was captioned:

‘ON OUR WAY TO STEAL YO GIRL! And by steal yo girl I mean IG Livestream us watching [Emogenius] on GSN in 20 minutes. Go watch the Livestream. It’ll be me, my girl, and your girl that we stole.’

That was the last photo Hunter posted with Lex. Thus, it is safe to assume that the pair have broken up because it’s already more than 3 years since Lex was publicly seen with Hunter.

Although Hunter has not posted any serious photos with any women, his relationship with his co-host at Nightly pop, Morgan Stewart, is really close. The pair don’t only show chemistry on the show but also in their Instagram pictures.

However, it’s too early to say if Morgan has any possibility of being Hunter March’s wife. Only time will tell that.