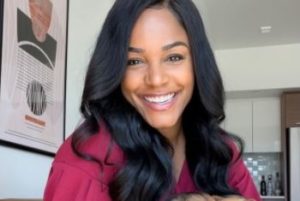 Life gets really good when you learn to embrace forgiveness, self-accountability, and personal growth. Well, this was what Nia Moore said after she tweeted a pic with her The Challenge co-star, Jordan Wiseley.

Over the May 2021 picture, Jordan was captured kissing Nia in the cheek and obviously, the comments were filled with fans speculating about their friendship.

Learn more about their deal at the end of this Nia Moore wiki. Meanwhile, get to know Nia’s life’s story as you reach there.

As per her birthday, Nia is of the Aquarius zodiac.

Nia Moore Parents, Is She A Conservative?

Nia Moore is one of the three daughters born to her parents, Harriet and Andrew Moore. Though not much was known about them, Nia has let her fans have a glimpse of them over her socials; especially on fathers/mother day.

On father’s day 2020, she uploaded her childhood pic with her dad, captioned,

“Forever grateful for your everlasting, unconditional love…then and especially now. Happy Father’s Day to all the loving daddies out there. #GirlDad”

As to the question, is Nia a conservative or not? The answer is all laid out if you have been following her. Over her socials, she often tells her fans not to let “conservative media make you put your foot in your mouth.” Even during the 2020 MAGA protest, she spoke in favor of “black people” noting that “like 70% of the people damaging property, looting, setting fires were not black people.”

Talking about her siblings, Nia’s elder sister is named Mecca Moore Tartt, and her other sister is Makeda Moore.

Like Nia, Mecca was already a social media sensation. As the founder of Wives 7 Day Prayer Challenge and Self-Care Summit, and co-founder of A Weekend For Love, Mecca garnered over 10K followers over her IG.

Whereas, Makeda was involved with the cosmetic business. As of 2021, she was a Ph.D. clinical psychology candidate, working as a mindset and lifestyle coach.

To sum up, Nia’s family is close. Occasionally, the whole aunts and cousins (maternal and parental both) gathered at her parent’s house “to spend some quality time”.

Her Stints On The Challenge, Real World

Nia Moore first appeared on The Challenge: After Show back in 2014. However, she was only featured in 3 episodes then. A year later, Nia returned to the show as a regular cast to compete for the season Battle of the Exes II. Unforutalty, she was disqualified just before the final after she assaulted Jordan.

But this wasn’t the first time Nia head-butted with Jordan. Previously, the two met in The Real World: Portland in 2013, where they got into a heated argument leading to Jordan using racial epithets.

Apart from these two, Nia has also appeared in an episode of The Choice in 2012.

The reality star, Nia Moore garnered a net worth of under $800 thousand as of 2021. But was it all from her time on the Television?  The answer is no. The Howard University graduate was also working as a corporate flight attendant a the Delta Private Jets then. Reportedly, a corporate flight attendant working for Delta Private Jets earned an average of $118 thousand annually.

But being a flight attendant isn’t all Nia wants, she shared that she was also a “private chef”. Furthermore, she started a food blog at “beautyandthefeasts.com” to “articulate the steps of each recipe in a way that’s comprehensive to even the most inexperienced of cooks.”

Did you know: Nia was also a spokesmodel for the fitness device The Booty Belt.

Jordan Wiseley And Nia Moore: Dating, How Did They Meet?

Nia Moore has had an up and down friendship with Jordan Wiseley, but as of 2021, the two seemed to have more than reconciled. After sharing the pic where Jordan kissed her on the cheeks, Nia replied to a fan comment,

“Y’all wild in my comments rn. The moment you learn to embrace forgiveness, self-accountability and personal growth…life gets really good. Some of y’all should really try it.”

Shortly after, Nia then followed it up with a short clip of Jordan flaunting his haircut. She wrote,

However, the two weren’t dating at the time. As things escalated, Jordan shed light on the matter and shared that he was dating a different girl at the time (name not shared). This would be his new girlfriend after his split with Tori Deal.

As for her stint on The Challenge back in 2015, Nia was once asked if she ever dated Leroy Garrett. To which, she replied that they were “actually like brother and sister” and were never romantically involved.

Instead, Nia was more interested in CJ then. She mentioned that “he was pretty cute and has a great smile.”