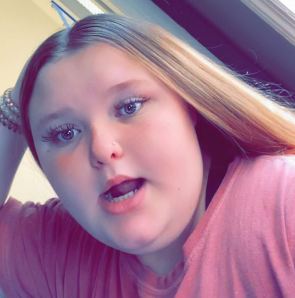 Alana Thompson AKA Honey Boo Boo is best known as a reality star who attained fame from age 5. Not only her, but her whole family rose to fame as reality stars. Heck! her mother got her own reality show. Let’s go through this Alana Thompson article for some of the highlights in her life.

Born in 2005, Alana Thompson turned 15 years old while celebrating her birthday in August of 2020. Furthermore, she received birthday wishes from her family members on 28 August. Also, she secured Virgo as her zodiac sign.

In early November 2020, Alana Thompson revealed her plans about going through a weight loss journey to her fans. She captioned the post—”You hating but I’m popping regardless.”

Followers on her comment section noticed that Alana Thompson had lost weight. A fan commented, “She lost weight, good job sister”. She appeared happy and healthy pursuing her family members’ footsteps who were documenting their weight loss journey.

In March 2021, Alana shared updates on the weight loss journey through multiple snaps. But, she omitted to reveal the exact pounds that she shed in this process.

Alana isn’t the only one attaining weight loss. Her mother June “Mama June” Shannon also documented her weight loss in Mama June: From Hot to Not in 2017. She lost about 300 pounds going through gastric sleeve surgery.

Alana “Honey Boo Boo” Thompson was born to her father Michael “Sugar Bear” Thompson and her mother June “Mama June” Shannon in her hometown of McIntyre, Georgia, the United States. Michael Thompson worked at Snowco General Contractors in the Chalk Mines in their hometown before he turned into a reality star.

As for Mama June, she is the star of her own show, June Shannon: From Hot to Not or which was later dubbed as Mama June: Road To Redemption.

Sugar Bear and Mama June met each other online in a chat room in 2004. But, they tied the knots only 9 years after meeting each other. As Heavy reported they weren’t technically married but organized a commitment ceremony.

However, Mama June and Honey Boo Boo are estranged after June’s arrest in 2019. Though she was the only child of her parents, Honey Boo Boo has three other sisters: Lauryn “Pumpkin” Shannon, Jessica Shannon, and Anna Cardwell.

However, Lauryn AKA Pumpkin was the one taking care of her sister. She now has two people to look after, her sister Alana AKA Honey Boo Boo, and her daughter Ella. In October of 2014, the news made headlines that she was dating her ex, Mark McDaniel who served 10 years for forcing oral sex on 8 years old and documented it in a hotel room.

The relationship was criticized even more when Alana’s sister Anna came forward with the claim that he had molested her.

June also confirmed that she will continue to live with Pumpkin. Further, she accused Sugar Bear of not taking care of his daughter and contacting her only during the production.

Honey Boo Boo AKA Alana Thompson could be discovered on several platforms. As of May 2021, her Instagram account flaunted 934k followers in total. In the same way, she was also on Twitter with 168 followers.

Furthermore, Alana was also on Facebook. She had a personal profile with 3,506 followers whereas 941k followers on her Facebook page.

According to Celebrity Net Worth, Alana Thompson accumulated a total net worth of $800 thousand. In her debut reality show, Alana Thompson was paid $50,000 according to Heavy. She is also a brand ambassador for Fab, Fit Fun, and Homestyle Harvest Chicken Nuggets.

Alana Thompson started her career in entertainment at the age of 5 on Toddlers and Tiaras in 2012. She rose to fame quickly eventually appearing on TV shows such as Jimmy Kimmel Live and The Barbara Walters Summer Special.

The thriving popularity landed her own show titled Here Comes Honey Boo Boo. The show ran from 2012 to 2014 that had a total of 26 episodes. She also went on to appear on The Talk, Steve Harvey, Family Feud, Who Wants to Be a Millionaire, and Good Morning America.

After the end of her own reality show, Alana was also featured on Live with Kelly ad Ryan, The Wendy William Show, Inside Edition, The Doctors, and Access Hollywood. She was nominated for Teen Choice Award in 2015.

While starring in Dancing with the Stars: Juniors, Alana made a total of $67,000 for the four episodes that she starred in. Honey Boo Boo and her family returned once again with the show Mama June: From Not to Hot. Whereas, she has been associated with Entertainment Tonight since 2015.

[Honey Boo Boo] Alana Thompson Boyfriend: Who Is She Dating?

Certainly, Alana Thompson is in the age group where she is eligible to have a boyfriend. During an Instagram Q&A on 13 January 2021, one asked her if she had a boyfriend. To which, Alana responded with a “Yessss.”

However, Alana wasn’t ready to divulge any further information on the one she was dating. Since there exist no updates on her parting ways from her mystery boyfriend, we believe the realtionship was ongoing as of May 2021.