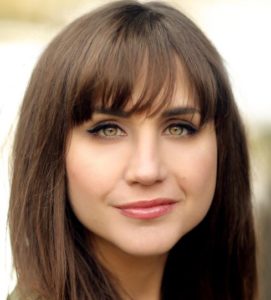 In early 2020, Natasia Demetriou piqued the interest of the viewers as she appeared on Netflix’s The Big Flower Fight season 1. As the host to the show, her proclivity towards the garden sculptures indeed intrigued the friendly floral fight.

Natasia first came to the limelight with her appearance in the TV series What We Do in the Shadows (2019). She was cast as Nadja, a Romani vampire. Moreover, her role got so popular that she used to get a lot of messages on Instagram asking for her blood.

As a comedian, actress, and screenwriter, Natasia aspired to leave her mark in the entertainment industry. Also, learn more about Natasia Demetriou’s husband, boyfriend, and dating life as the article continues.

Born in 1984, Natasia Demetriou celebrates her birthday on January 15. She was 36 years of age as she appeared on The Big Flower Fight season 1.

Corresponding to her birthday, Natasia is of Capricorn zodiac.

Natasia grew up alongside her sibling, Jamie Demetriou who is also an actor and comedian. She has appeared in several shows with her brother Jamie, close and uncompetitive as they insist.

Reportedly, Natasia and Jamie attended the same university together in Bristol. They both were the members of Bristol Revunions’s sketch troupe, Comedy Biscuit.

As for Natasia Demetriou’s parents, she admitted that they lived together as a family but they were not together. She added it had something to do with her mother being lazy and her dad being Greek.

Also, Natassia’s father, Sotiris a chef, has made a cameo in the final episode of Stath Lets Flats. Allegedly, her father was a terrible driver. Thus, both Natasia and her sibling didn’t learn to drive until mid-2018.

The most distinct feature about Natassia would be her green hazel eyes. Furthermore, those eyes have helped her role as Nadja to be a prominent figure in What We Do in the Shadows.

Also, she won the Skinny Debutant Award in 2014 at the Edinburgh Festival Fringe for You’ll Never Have All of Me.

Natasia Demetriou’s net worth was estimated to be around $1.2 million.

People often confused Natassia’s brother Jamie to be her husband because they share the same last name. But we are here to let you know that, Natassia Demetriou wasn’t married as of 2020.

The rumors probably started after she mentioned Jamie as her “dream husband” on her Twitter on May 24, 2018. But it was known to her fans that Jamie was her brother and she mentioned him to be his dream husband several times before too.

Being a comedian, Natassia loved to make jokes about her boyfriend. In late 2019, she referred to her boyfriend as a turkey. Though she didn’t disclose her boyfriend’s name, she was supposedly dating during the time.

Natassia was also shipped with her on-screen husband, Matt Berry from What We Do in the Shadows. However, there were no reports of the duo to have dated outside the set.

In the end – Eric Schroeder Wiki: Who Is Sukanya Krishnan’s Husband?

In 2020, Netflix premiered one of a kind reality show titled The Big Flower Fight. The British reality TV...

One Reply to “Natasia Demetriou Husband, Boyfriend, Net Worth, Height”