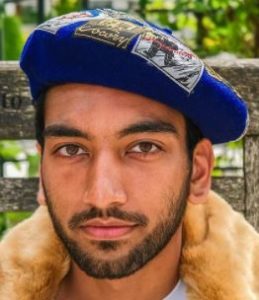 After his acting debut only a few years ago, and no acting credits before that, Nabhaan Rizwan was making huge strides into the world of movies and TV shows and acting.

Read the article to its completion to know more about the rising star that is Nabhaan Rizwan.

Nabhaan Rizwan was 23 years of age (as of November 2020). Apart from that, there was no information about Nabhaan’s birthday or his zodiac sign.

Nabhaan Rizwan comes from a family of British-Pakistani ethnicity. His parents, Shahnaz and Rizwan Siddiqui were both Pakistani Muslims. They later migrated to the UK. Both of his parents were also artists.

His father was a playwright in Pakistan. After moving to the UK, however, he became an accountant and an interpreter. His mother was an actress. And she had appeared in her father’s movies as a child actor.

Moreover, Rizwan’s grandfather, Ahmed Ghazi, was a filmmaker in Pakistan. Also, his grandfather fought from the side of Britain during the First World War.

Nabhaan’s older brother, Mawaan, was also an artist. Mawaan was a comedian and had starred in Channel 4‘s Taskmaster. Nabhaan’s brother also had a Youtube channel with over 88k subscribers.

Nabhaan grew up in a Muslim family, and he adhered to few rules of the religion. But he was not a practicing Muslim.

Nabhaan Rizwan stands at a modest height of 5 ft 10 inches and weighs under 78 kgs.

Talking about Nabhaan’s distinct features, a particularly prestigious British media outlet had the following things to say about him: “soft brown eyes, gunslinger cheekbones, and a particularly imperious coat”.

Nabhaan had a decent following on social media, neither too big like some of his fellow young stars neither too notoriously obscure.

On Instagram, where he was the largest, he had a total of 7360 followers (as of 30 November 2020). He was comparatively smaller on Twitter and had almost 3k followers.

Nabhaan rise to stardom was steep. In his late teens (18/19), he was a cricket-loving non-artist in a family of artists. By his early 20s, he was a rising star, having already worked for the big names in British cinema like Sam Medes and Riz Ahmed.

Things turned when Nabhaan found himself on the verge of his 20s and his cricketing aspirations going nowhere. He did not want to go to university. And of course, his mother was always encouraging him to go to the acting profession.

So, he thought, what the hell. Well, not really but he made an acting showcase with some friends. And soon he was spotted by an agent. And the first audition he gave, he was selected to star as Raza Shar in BBC‘s BAFTA Nominated drama, Informer.

Well, the path was open. Afterward, Nabhaan appeared on Channel 4‘s drama series The Accident. Then came the streaks of big movies with big-name filmmakers.

Nabhaan also had a few of the projects down the line. A short movie Grey Suits Us, and the movie Last Letter from Your Lover, were set to release soon. Whereas, Hiro Murai’s miniseries Station Eleven was still on the filming stage. The show was about a flu pandemic that kills a majority of the people on earth. Ironically, the filming of the show was stopped by a real pandemic.

Apart from acting, Nabhaan is also a Hip-Hop artist performing under the alias El Huxley. In 2020, he had released his first EP, Fantastic Planet. Admittedly, he wants to study fashion at the Central Saint Martins.

As of November 2020, Nabhaan Rizwan’s net worth was over $500 thousand. The net worth will go up with the progress of Nabhaan’s career.

As of 2020, Nabhaan Rizwan’s dating life was tightly under wraps. In an interview given that year, when asked about any romantic interests, girlfriend, or boyfriend (there were gay rumors), Nabhaan said he did not have anything to tell.

He went on to say that he was very “boring” as he did not drink alcohol or do drugs. But he did say that his interest was in people.