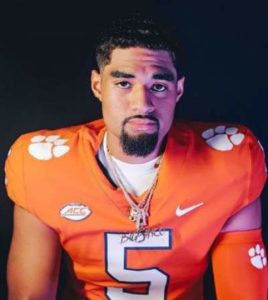 D.J. started his first game for Clemson on 31st October in 2020, against the Boston College Eagles. He had replaced Trevor Lawrence, who was removed from Clemson’s starting lineup after testing positive for COVID-19.

Impeccably, he landed a comeback victory after being down by 18 points in the first half, winning the next-level fame.

If you were wanting to know, here’s everything worth exploring, about him.

D.J. Uiagalelei is of Samoan descent. Samoan, if you did not know, are the indigenous Polynesian people of the Samoan Islands, speak the Samoan language.

D.J.’s parents are first-generation Americans. They are from the Samoan Islands, who first moved to Hawaii and then to California in 1985.

It is said, D.J.’s folks including his sibling/little brother Matayo fly from Calfornia to watch him play each weekend. (Matayo, who is already over 6’5” and 245 pounds himself, is also probably wishing for a sports career like D.J.) 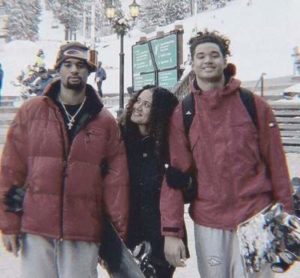 D.J.’s father, Dave, worked multiple jobs of security at a high school, selling mattresses, just to pay the rent, and said there were times when he was not sure he would be able to pay it.

Some people have found it difficult to nail down the pronunciation of D.J.’s last name. So, a guide on how to pronounce Uiagalelei’s name would be to figure out there is this ‘n’ sound in the middle of it despite no ‘n’ in the name itself.

And, thus the official pronunciation is, “oo-ee-ANH-gah-leh-lay.”

D.J., he said during a press conference before Clemson played Notre Dame, that is used to people calling his name with all kinds of pronunciations. His words were:

“I’ve heard a lot (of people butchering the last name), probably, I mean. But for me, I think like Wiggly Lee (was the worst). I’ve heard Wiggly Lee one time, I forgot who said something like that. Like Wiggly Lee. I never heard that type of pronunciation.”

Only a college freshman, at the time of this writing, D.J. Uiagalelei stood to 6 feet and 5 inches in height and 245 lbs in weight. All thanks to his father Dave Uiagalelei’s tall and sturdy genes.

Not long ago, during D.J.’s game against Boston College, people noticed Dave who is 6’4” and 380-pound. Everyone saw him in and the ABC cameras frequently zoomed in on the man who just so happened to have worked as a bodyguard for stars like Rihanna, Chris Brown, D.J. Khaled, and Meek Mill.

Dave, however, left the career in 2009 when the travel and distance from D.J., wife Tausha, and younger son Matayo became no longer bearable.

D.J. Uiagalelei attended St. John Bosco High School in Bellflower, California. As a junior in 2018, he was the USA Today High School Offensive Player of the Year scoring baseball for 3,366 yards and 48 touchdowns.

Even as a senior, he continued to play baseball for 4,225 yards and 48 touchdowns.

D.J. started tossing a football around with his dad as a two-year-old, even then, his father was sure he had a prodigy in hand.

As of the date, D.J. Uiagalelei is reported to have already pulled in over $300 thousand net worth.

As a five-star recruit, D.J. committed to play college football for Clemson University in May 2019. Later, in December, he signed with them and enrolled in January, the next year.

He and more than 70 colleges offer coming-in before he chose Clemson. And it was not an easy-peasy decision. D.J. and his family gave so much thought to the matter.

D.J. took a trip to visit campuses at Alabama, Georgia, and Clemson.

His first stop was Alabama, and he loved it. He immediately called his father and was ready to commit. But, because his dad wanted him to keep his options open, he went to see other schools, and thus happened Clemson.

D.J. Uiagalelei is utterly focused on his sports. So much so, he was never publicly spotted dating any women.

Also, his Twitter with 33.3K followers and Instagram with 138k followers, were not at all telling about his girlfriend (if he had one).

So, for now, it’s likely impossible to speak anything regarding his dating life.