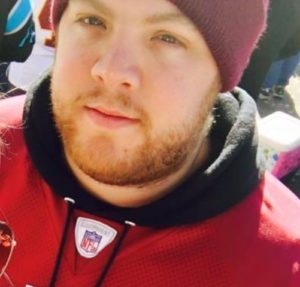 You are familiar with Chuck Potthast, the patriarch of the Potthast clan from TLC 90 Day Fiance who had 7 children. Of them, only four of the kids were publicly introduced. However, Chuck went on his Instagram and introduced his son, Mike Potthast to the fans.

One IG user commented, “Must be ur normal son 😂😂😂 there’s always the crazy and the normal, and Charlie already took his crown for crazy 😂”

Who is Michael ‘Mike’ Potthast? What job does he do to make a living? Is he sane one in the family, a normal one? Learn all about him in this Mike Potthast Bio.

Chuck Potthast and his ex-wife Pamela Putnam welcomed Michael ‘Mike’ Potthast as one of their seven children. His parents divorced later, without giving away any information on the reason behind it.

Then, Pamela Putnam married Walter Putnam after the divorce. She attended Great Mills High and graduated as a class of 1979. Later on, she enrolled at Cappa Chell Finishing School in Tyson’s Corner, Virginia where she studied modeling, etiquette, and personal best in the class of 1980.

After that, Pamela joined Barbizon USA as an associate executive director. She quitted her job in 2009 after working for the company for 7 years. She auditioned girls from the age group of 8-18 across the country for modeling development and opportunities for placement.

Florida-native Pamela is also credited for founding Stellar Talent & Image. She also contributed as a creative director in Wesley Chapel, Florida. Starting from August of 2013, she worked as a talent agent for the company. Furthermore, in October 2020, Pamela also served as the board member of Movieguide.

Chuck has always been on the receiving end of praise from the TLC fans. As a doting father and grandfather, he has done a lot for his family. He worked in the real estate business and owned a company called CDC Capital Investments LLC in Florida.

The family business helped Chuck build a total net worth of over $600 thousand net worth. He also owned properties around Tampa, Florida area. Also, there were words of him stacking $240 thousand every year.

Mike Potthast grew up with six siblings and among them are; Elizabeth Potthast, Charlie Potthast, Jennifer Potthast, and Becky Potthast.

Like all the educated members in the family, to him also education appears to be a big deal. He attended Charlotte Christian School and graduated as a class of 2012. Later on, he attended the University of North Carolina at Charlotte where he studied Bachelor of Business Administration (BBA). His main area of study was Non-Profit/Public/Organizational Management.

Mike joined the University of South Florida in 2017. He secured his Master of Business Administration while focusing on Sport and Entertainment Management. He graduated in 2019.

On Instagram, Mike Potthast has a handle (@m_potthast). However, his account with 941 followers and 3 posts is private as of this writing. He is also on Facebook connected with 2081 of his friends and family.

Mike Potthast, with his job in advertising, built a total net worth of nearly $100 thousand.

Unlike most of his family members, he chose not to pursue a career in real estate. Instead, He chose a different path for him deviated from real estate to sports management.

After five months of a gap, he started working as a business development assistant for Learfield. During that period, he was responsible for prospecting potential business partners in the Providence, RI area and ways to market them during Providence Friar basketball and hockey seasons. It only lasted for 2 months ending in June 2017.

For the next five months from August 2017-December 2017, Mike worked as a graduate assistant for Golfers Vs. Brain Cancer Foundation. He worked as the main point of contact for all participants, sponsors, and donors. He also took the responsibility for maintaining current sponsorships while establishing and developing new partnerships.

As in-charge, Mike inspected the execution of all event festivities, including pre-event, during, and post-event. He administered all marketing of the golf tournament, including digital, social media, radio, and print. He also played a vital role in raising over $70,000 for brain cancer research.

From May 2018 to May 2019, Mike also worked in Minor League Baseball as Business Development & Media Assistant in Tampa, Florida. While he was in the company, he and his team were able to drive in nearly $2M in incremental revenue.

From May of 2019, Mike Potthast had the job of coordinator of Advertising Systems for the PGA Tour in Ponte Vedra Beach, Florida.

Mike Potthast Wife, Is He Even Married?

Mike Potthast isn’t married to have a wife in the first place. If he was, the event would’ve been featured on his sibling’s social media. However, evidence exist of him being attracted to a few girls and has certainly been on a few dates before. His love life as a young man can be observed on Facebook and Twitter.

Mike appears to be in a relationship with Rachel Bonnell according to the post from October 2012. She claimed in a tweet that he loves her and she misses him. But, the confirmation on the nature of the relationship never came out. 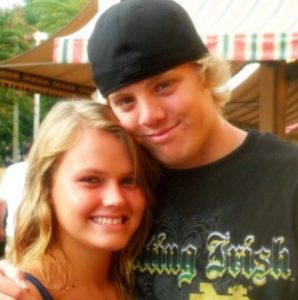 Mike also seems to have dated a beautiful girl named Olivia in 2008. In the pic, he had his arm around her and held her close to him. No further description was provided regarding the nature of the relationship.

Talking about recent, Mike chose to remain private about his relationship. So, his dating life appears to be obscure.