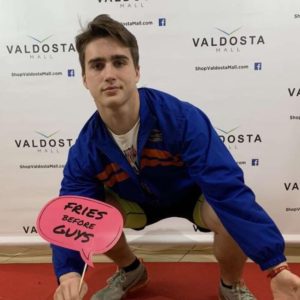 Grayson Leavey is a promising sophomore student-athlete whose storyline is a little different and enticing. Along with his career, his relationship has also been explored on the show which is different than what other athletes had to offer the show.

Let’s cut to the chase and learn more about him with this Grayson Leavy Wiki where we cover details on his girlfriend and his parents.

Netflix’s Titletown High introduced Grayson Leavey, Valdosta High’s Tight End, as one of the athletes focused on the show. The show was built around the concept of the school’s reputation in sports, a few promising players who came out of there, and the corruption controversy and illegal team recruitments by the school’s coach.

Other players that were the focal point on the show include Jacarrius Peak, Aalah Brown, and Jake Garcia.

Grayson Leavy turned 16 years old while celebrating his birthday every year on 19 September 2020.

Paul Leavy and his mother Amanda ‘Mandy’ Page Leavy welcomed Grayson Leavy as their son in his hometown of Valdosta, Georgia, United States. His parents married in 2000 and have been happily married ever since.

In 1981, his father graduated from Balboa High School in Panama. His career as a photographer started in 1982 working for Flash Professional Photography in Gainesville, Florida. After that, he attended the University of Florida and graduated as a class of 1985 with a Bachelor of Science in journalism and with a photojournalism specialty, and a minor in visual arts. Before that, Paul worked as Chief Photographer at Valdosta Daily Times.

His father spent 26 years working in Valdosta Daily Times. Starting from August 2012, he has been working as a university photographer at Valdosta State University.

Valdosta’s athlete’s Twitter account (@GraysonLeavy229) garnered him 100 followers where he tweeted only three times as of this writing.

Growing up in Valdosta AKA “Titletown” for its sports legacy, Grayson pursued sports like most kids. Dreams of becoming a Wildcat always sat with him and it started to manifest during his middle school years. Not only football, but he also demonstrated excellence in several sports. Being a triple threat, he excelled in wrestling and soccer as well.

The hard work that he put in helped him perform and build a reputation as one of the renowned players in the school. But for a short period, his dream started to crumble when Grayson came in close contact with someone who was covid-19 positive. Hence, he missed out on two vital playoff games after doing exceptionally well in the first one.

This disappointed Grayson and was mad at himself for being so careless. He had goals to achieve and the pandemic affected it to a certain extent. In less than two weeks he returned with a negative COVID-19 report and headed straight to school for practice. He persevered and covered everything he’d missed out on in a short while and even got the opportunity to play in the semi-finals.

Disappointingly, the team couldn’t see it through, and their season came to a close.

When the show premiered in August 2021, Grayson Leavy was a sophomore student with two more seasons to play with Valdosta’s Wildcats. However, the team was banned to play because of their coach’s controversy, but he is expected to perform extremely well as a junior and high school senior as he graduates high school.

Furthermore, Grayson hopes to secure the scholarship that colleges would offer during the college recruitments. As the show suggested, his parents were in no position to afford his college education.

In Netflix’s Title Town, Grayson Leavy is in a love triangle with Zoey Watson and Lenley Gross. Zoey is the football star’s friend from childhood and had a little history. They always labeled their relationship as “just friends” until the filming of Netflix’s show began.

On the other hand, Grayson developed a relationship with Lenley Gross and started dating each other eventually. He claimed Lenley to be his girlfriend. However, the rumor of Grayson and Zoey hooking up with each other flew and stayed intact.

Of course, it caused friction and argument between Grayson and his then-girlfriend Lenley. 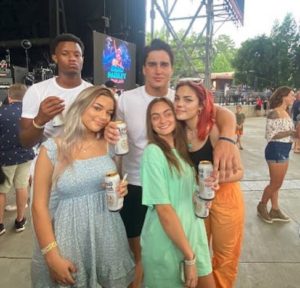 Grayson and his alleged girlfriend Zoey together with their friends (Pic: Grayson’s Instagram)

Tired of what she had to hear, jealousy took over Lenley confronted Grayson with the circumstances. She eventually broke up with him after multiple arguments.

During the time of isolation, after the exposure to someone with COVID-19, Zoey joined Grayson to isolate together with him. They rekindled the relationship and that’s all that we know from season 1 of the show.

But the big question remains, are Grayson Leavey and Zoey Watson from Titletown still together? On 18 August 2021, they appeared together along with their friends but just jumping to the conclusion that they were still together based on that wouldn’t be possible.