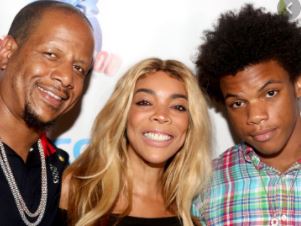 Kevin Hunter Jr is the son of Wendy Williams and her second husband, Kevin Hunter. While everyone knew he was very supportive of his mother, Kevin had a tumultuous relationship with his father.

In the Wendy Williams biopic premiered in late-Jan 2021 on Lifetime, Kevin made a cameo.

This Kevin Hunter Jr wiki highlights facts about Wendy’s only son. Furthermore, the article attempts to unravel her net worth, height, and girlfriend.

When Was He Born?

In his 2020 birthday, Wendy Williams shared a rather creepy photo on IG. She captioned the post with the words— “Today is my biggest day! Son Kevin & I are celebrating his 20th birthday❤He’s in Miami & I’m in NYC, but love never stops. If you look closely you’ll see remains of 1st hair cut, my cerclage is on sneaker, like a mom… I DO have all his teeth😂I’m not a fan of cake, but today OK…for my son❤ What are you doing?”

Who Are Kevin Hunter Jr Siblings?

As of January 2021, Kevin Hunter Jr didn’t have any biological siblings. However, he did have a half-sister named Journey from his father’s ex-marital affair.

In May 2019, Kevin Hunter Sr’s mistress, Sharina Hudson gave birth to a baby named Journey. The baby news arrived a month after Wendy filed for divorce. Wendy and Kevin officially became a divorced couple in January 2021.

A supportive son, Kevin was there when Wendy received a star on the Hollywood Walk of Fame. To celebrate the occasion, the talk show host took to IG and labeled Kevin “My son shine”.

In her 2015 interview, Wendy shared her struggles while concieving Kevin. By her admission, she fought hard to become a mother. Wendy admittedly suffered 2 miscarriages within 5 months before she became pregnant with Kevin. In many ways, he was a rainbow baby. Wendy also insisted she would’ve had more children but didn’t want to test her blessing.

Kevin’s relationship with his father, however, hit a low point in 2019. May that year, Kevin Jr punched Kevin Sr on the face. As a result, the police arrested him. At the time, the rep insisted the father-son enjoyed a great relationship. Kevin Jr pleaded not guilty to assault charge in June 2019. At the time TMZ reported that his father wasn’t pursuing the case.

In 2020, Kevin lost his maternal grandmother, Shirley Williams. Wendy broke the tragic news in Decemeber 2020, claiming Shirley passed away months ago. Shirley was survived by her husband, Thomas and  3 children including Wendy.

Now at the peak of his youth, Kevin Hunter Jr stands above 6 feet 2 inches in height. His father, on the other hand, measures the same. Meanwhile, his mother is 5’10”.

In 2018, Wendy Williams opened up about Kevin’s overcoming his K2 addiction. To those unfamiliar: K2 is synthetic canibas. 15-year-old Kevin tried K2 for the first time. In the months that followed, he became unrecognizable to Wendy. With the family’s assistance, Kevin overcame the addiction.

Perhaps, Kevin was on social media platforms under a different username, protecting his digital footprint. Suffice to say, he chose anonymity over popularity.

In September 2018, Kevin Hunter Jr left New York for college in Miami. Although not confirmed, he attended University of Miami. It is likely Kevin held a part-time job in college.

To mention his net worth, Kevin Hunter Jr was already a millionaire, racking at least $1 million. Plus, he has the potential to inherit his mother’s $40 million fortune.

Who Is Kevin Hunter Jr Girlfriend?

As of January 2021, there wasn’t a single publication reporting Kevin Hunter Jr’s acting dating life. May be, he had a girlfriend but preferred to keep their relationship low-key.