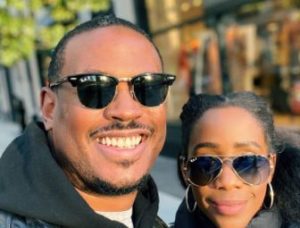 This Marcus Richardson wiki attempts to dissect Abby Phillip’s husband, his job, age, and net worth. Furthermore, continue reading to find out his parents, education, and height.

Also, Marcus wakes up to birthday messages on his phone on 9th March. Meanwhile, he is Pisces.

His full name Is Marcus Glenn Richardson. He was born to parents: Russell Richardson (father) and Toussaint Richardson (mother).

In his family, Marcus also had a big sister named Jasmine Richardson.

Because of their dad’s military job, the Richardson Siblings grew up traveling around the world. They even lived in Okinawa, Japan.

Marcus’s father, Col. Russell Richardson served in the Gulf War. What’s more, he retired as the director of logistics for the Third Air Forces in Europe at Ramstein Air Base.

For Marcus, Russell was his hero growing up. In June 2020, he took to IG and penned a heartful tribute. He wrote— “Growing up, I wanted to be as strong, tall, funny, smart, driven, and cool as my dad. Or at least ball like my dad. 😁 Over the years, but especially during these past few weeks, I’ve thought about everything my father has instilled in me. Not only as a man but as a Black man in this country. Our family’s legacy, like so many, is paved by men and women who stared at the ugliness of America but persevered to ensure that we all had a place at the table, and that fight continues. My father guided me and prepared me for what I would eventually face, and I’m eternally grateful for that wisdom and love. Love you Dad. Happy Father’s Day.”

To mention his height, Marcus Richardson stands above 5 feet 11 inches tall. No wonder, he towered over Abby Phillip.

Moving on to Marcus’s social media presence, he doesn’t seem to be available on Twitter and Facebook.

However, Marcus was active on Instagram [@gizmont]. Having joined the platform in August 2013, he accumulated less than 1000 on the platform.

After studying at the Ramstein Air Base, Marcus returned to America and enrolled at Florida State University. He would eventually graduate with a bachelor’s degree in International Affairs.

Between November 2009 and July 2012, Marcus served as a Desktop Analyst at Howard University. He then worked as a Technical Support Analyst for 1 year 7 months at LivingSocial.

In January 2014, Marcus joined nVisium as a Senior Application Security Consultant. He would later become the company’s Managing Consultant.

Holding the job of Security Professional, Marcus Richardson made a handsome salary of above $100 thousand. The income added to his $1 million net worth.

It was in Washington in the year 2011 at a mutual friend’s party, Marcus Richards crossed paths with Abby. Being the outsiders at the event, they struck a conversation.

Reportedly, Marcus and Abby bonded over shared interests. However, before they could exchange numbers, another partygoer interrupted them.

Marcus would meet Abby at the second party thrown by the same mutual friend. Shortly after, the couple began dating.

Following 5 happy years as a boyfriend-girlfriend romance, Marcus asked Abby to marry him during the Christmas party. By then, they were already living together in their DC apartment.

On 26th May 2018, Marcus and Abby tied the knot at the historic Anderson House of Washington DC. Besides the unexpected rain, their wedding was a smooth sail.

Abby had first shared she was expecting a baby in March 2021. At the time, she had shared— “[We] are having a baby girl this summer! I shot this cover when I was 4 months pregnant and I can’t wait to be able to tell my baby girl that she was on the cover of a magazine … 😭😭😭 there are just no words.”