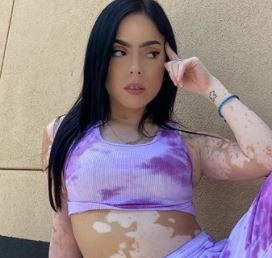 Ash Soto is a body-positive influencer. A sufferer of vitiligo, Ash shot to fame painting her body. Instagram users recognize her as “the girl with the world painted on her body”.

Keep reading this Ash Soto wiki and discover her boyfriend, parents, and measurements. Likewise, find out her ethnicity, job, and net worth!

To mention her zodiac sign, Ash was born a Virgo.

Did you know?: Before the Vitiligo diagnosis, Ash was a cheerleader.

As noted by Famous Birthdays, Ash Soto possessed Puerto Rican ethnicity. However, the outlet claimed she is a native of Massachusetts.

For reasons unknown, Ash refrained from revealing names and identities of her father, mother, and siblings (if she had more than one).

As of 2020, Ash allegedly weighed under 56 kilograms. Plus, she had inked “SHE IS ART” on the back of her neck.

Operating under the username @radiantbambi, Ash enjoyed 166 thousand followers on IG (as of Oct 2020). What’s more, she averages 10 thousand likes per post on the platform.

Ash was 12 when the doctors diagnosed her Vitilogo. In case you were wondering, Vitiligo is a condition which causes patches of skin to lose pigmentation.

Recalling her early doctor’s appointment, Ash shared— “Right when I showed the doctor my spots, they immediately knew what it was. I just remember being so scared in that moment and confused. I didn’t know what vitiligo was — I had no knowledge of it.”

Because of Ash’s skin condition, fellow students bullied her. To combat the bullying, she began wearing sweaters and pants.

Over time, Ash felt the need to work on her insecurities by giving herself challenges. She explained— “I knew that I didn’t want to live that way anymore and I knew that I had to make the change. So with time I started doing little challenges, whether it was going outside in shorts or going outside in a tank top, which seems so small for some people, but for me, it was the biggest thing ever.”

Circa 2016, Ash’s life would change once she began drawing on herself. About how started using art to build confidence, Ash explained— ““I started tracing every spot that I could have reached and when I looked in the mirror, it just looked so cool and beautiful — it looked like a map to me. So I was like, ‘Wow, this is so empowering. If I could just show people how beautiful this looks, maybe they won’t find their vitiligo something that has to be a burden.’”

Ash told PEOPLE Magazine, she was hopeful her influencer status would inspire others to accept their true selves.

As of 2020, there existed very little proof that Ash Soto held a regular job. Nonetheless, her social media reach was certainly paying a portion of her bill.

Surely, Ash Soto owns more than $100 thousand in net worth.

As of October 2020, Ash Soto had yet to introduce her boyfriend to her Instagram followers. More importantly, she opted not to highlight her dating status.

Whoever was to steal her heart, the person ought to draw envy.