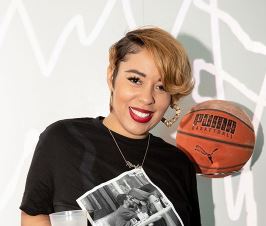 Humorous and opinionated are two adjectives that best describe Mandii B. Sharing their sexcapades and hilarious sex-centric tales on the podcast “Whoreible Decisions,” she and co-host WeezyWTF rose to fame.

Bear with us as we unfold Mandii B’s unmissable wiki details such as net worth, romantic endavours, and family background.

In 2019, Mandii B turned 29 years of age. On 11th October every calendar year, the public accountant-turned-podcaster wakes up to birthday messages from friends and family.

Originally from Florida, Mandii B is a product of a bi-racial relationship. While her mom was of Caucasian descent, her dad carried African-American ancestry.

In terms of ethnicity, Mandii B identifies more with her black side. Her real name, meanwhile, remains hidden.

Unlike WeezyWTF, Mandii came from humble beginnings. Following her parents’ divorce, her mother struggled to make ends meet. In her own words,

”I’ve lived in a shelter. I was on food stamps, section 8. That’s how I was raised.”

Nevertheless, Mandii B aced her grades in high school. For college, she enrolled at Georgia St. University but dropped out due to a shortage of funds.

When the college route didn’t go through, Mandii B moved to New York City with $400 in her account. While in Big Apple, she ran a sports/gossip site called “Full Court Pumps.” Her experience as a blogger would inspire the book “Up On Game.”

Realizing the importance of a University degree, Mandii then decided to focus on the lucrative finance industry.

By the time “Whoreible Decisions” came to fruition, Mandii and WeezyWTF had fallen out twice, only to make amends each time. Initially, they fought over a boy. The second time around, the frenemies got into a squabble in a club following a beef between their cliques.

Even at the peak popularity of “Whoreible Decisions,” Mandii and WeezyWTF continued to involve in a war of words. To lessen the growing tension, they even invited a therapist to their studio.

Mandii B’s podcast and media personality’s career culminates in a $150k+ net worth.

By her admission, Mandii always felt comfortable with her voluptuous physique. Circa 2019, she began shedding extra pounds and achieved astounding weight loss transformation.

Mandii B is bisexual. In the past “Whoreible Decisions” episodes, she laid out her dating preferences. The former Big4 Accountant strictly builds bonds with people of black and brown complexion.

Admittedly, Mandii always had an eye for athletes — tall and rich, to be more precise. Without disclosing their names, she painstakingly details her sexual relationships with the said athletes on her podcast.

Back in 2018, Mandii B shared romantic ties with a mystery man with the moniker “Felon Bae.” She never addressed him as a boyfriend.

Of all her “relationships,” none captivated the “Whoreible Decisions” audience other than Mandii B’s time with rapper Dave East. She regularly referenced the Harlem rapper as “24/7.”

Kiing Shooter Net Worth, Girlfriend, Height, Cause Of Death

On 5th May 2020, the news of rapper Kiing Shooter’s death sent shockwaves across America. He was only...

Together with Mandii B, WeezyWTF skyrocketed to fame as the co-hosts of the rebellious and controversial...