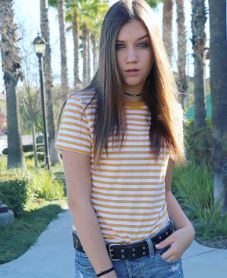 Here lay an article detailing Mads’ wiki-related facts! Read along to learn about her relationship history, family background, and net worth!

When love between her and rumored boyfriend Carso fizzled out, Mads allegedly ignited romances with TikTok star Case Walker and dancer Caden Conrique.

In July 2018, Mads commenced dating artist/social media star Charles Gitnick. She and her once-boyfriend Charles broke up in early Fall 2019.

Splitting from Charles, Mads fell for a mystery guy who simply went by the name Garrison. The duo attended the Instagram star’s homecoming party held in late September 2019. 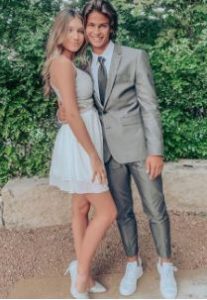 Fast forward to the year 2020, Mads stopped posting Garrison on Instagram. And as such, fans began suspecting that the two broke up.

Circa 2019, Mads had begun dating Sway House member, Jaden Hossler. They would date on and off before calling it quits in 2020. During their relationship, the couple would become close friends with Josh Richards and Nessa Barrett.

Following their split, Jaden began dating Nessa, a decision that pained Mads. Mads then appeared on the “Call Her Daddy” podcast and spilled beans about their split. Admittedly, she didn’t want to get back with Jaden.

On 24th December 2020, Mads Lewis turned 18 years of age. Per her date of birth, she is birthday buddies with fellow Capricorn Ricky Martin.

Born in Arizona, the USA as a triplet, Mads is siblings with a sister named Riley Lewis and a brother called Dakota Lewis. Both Dakota and Riley are immensely popular on Instagram.

More about her family: Mads grew up under the care of fashion designer Tiffany Lewis and construction worker Steve Lewis. The YouTuber’s parents named her Madison Rose Lewis.

Mads Lewis first gained popularity for her makeup tutorials and challenge videos. As of April 2021, 6.6 million+ fans followed her on Instagram while 508k+ people subscribed to her YouTube channel

Recognizing her social media reach, brands such as Addidas have handed Mads endorsement deals. Business opportunities coupled with acting gigs play an important part in solidifying her $500 thousand net worth.

As of April 2021, Mads accumulated 11.5 million followers on TikTok.

In September 2019, Mads posted a YouTube video titled “Boyfriend and His Brother do my Makeup Challenge.”