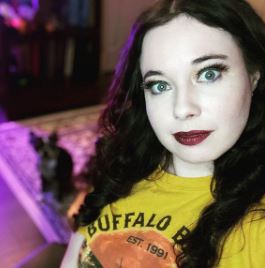 Lindsay Ellis rocks multiple titles including a movie critic, an author, and a YouTuber.

Below are the facts about Lindsay Ellis’ husband nick, their married life, and her net worth.

In March 2021, Twitteratis canceled Lindsay Ellis following her tweets about “Raya” and “Avatar: The Last Airbender”.

Lindsay, in a now-deleted tweet, wrote— “Also watched Raya and the Last Dragon and I think we need to come up with a name for this genre that is basically Avatar: the Last Airbender reduxes. It’s like half of all YA fantasy published in the last few years anyway.”

She then doubled down on her stance by tweeting— “I can see where if you squint I was implying all Asian-inspired properties are the same, especially if you were already privy to those conversations where I had not seen them. But the basic framework of TLA is becoming popular in fantasy fiction outside of Asian inspired stuff.”

Even after her justification, some people attempted to cancel Lindsay on Twitter. Meanwhile, there was a section of the users who defended the YouTuber.

Weeks after her tweets, Lindsay dropped a 90-minute video discussing the controversy. Although she didn’t directly apologize, the YouTuber acknowledged that their comments were stupid.

On 24th November 2020, Lindsay turned 36 years old. What’s more, her middle name is Carole. On the other hand, The Nostalgia Chick, The Dudette, and NChick are Lindsay’s nicknames.

According to biowikis.com, Lindsay Ellis stands 5 feet 2 inches (157 cm) in height. Meanwhile, she should weigh above 54 kilograms.

Lindsay is known for her choker bow tie, deadpan sense of humor, glasses, and wearing her hair in pigtails.

Reportedly, Lindsay Ellis hails from Johnson City, Tennessee— a city in Washington, Carter, and Sullivan counties in the U.S. state of Tennessee, with most of the city being in Washington County.

Lindsay Ellis was born to his parents: James Carroll Ellis and Sue Ellis.

James Carroll Ellis, Lindsay Ellis’ father, passed away in October of complications from Parkinson’s Disease. He was a native Navy Veteran, an educator, a contractor. A native of Roan Mountain, Tennessee, James was a graduate of Cloudland High School and ETSU. He also played multiple instruments.

Announcing her father’s death, Lindsay took to Facebook and shared— “I lost my father yesterday to Parkinson’s disease. I set up a tribute page through michaeljfox.org. The last few years of his life were more difficult and painful than I can put into words. No one should have to suffer the way he did. In lieu of gifts or flowers, please donate to research in fighting Parkinson’s disease.”

Lindsay Ellis’ mother, Sue Ellis is a school counselor at Science Hill. According to her Twitter bio, she has over 24 years of experience as a high school counselor— a job she loves.

Lindsay Ellis grew up without any siblings by her side. What’s more, her father’s obituary hinted she was his only offspring.

Lindsay Ellis is admittedly an Irish-American woman. In a February 2019 tweet, she shared — “yeah I’m sure an Irish-American in the year of our lord 2019 is intimately acquainted with systemic race-based oppression.”

Lindsay Ellis has a reported $1.5 million net worth.

According to this socialblade.com report, Lindsay earned anywhere from $6.5K to $103.6K from YouTube.

Lindsay even launched a Patreon campaign. For $2 per month, fans received early access to her YouTube content. Meanwhile, for $10 per month, she listed the patrons’ names in the credits for each main channel video.

To everyone looking to cop official Lindsay merch, click here!

As an author, Lindsay is the mind behind the books: “Truth of the Divine: A Novel” and “Axiom’s End”.

Who Is Lindsay Ellis Husband, Nick?

The wedding between Lindsay and Nick was a YouTube affair. The likes of Mikey Neumann, Harry Bewis, Jenny Nicholson, Shadow Todd, Kyle Kallgren, Dan Olson, Natalie Wynn, and Elisa Hansen witnessed the couple tied the nuptials. Some of the guests even tweeted videos and photos from the wedding. 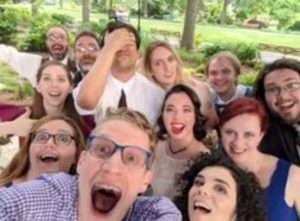 Lindsay Ellis and her husband, Nick with their wedding guests (Source: Instagram)

Lindsay’s husband, Nick is a Transformers fan. So is the YouTube star. Thus, on their big day, the couple ordered Starscream and Windlade to sit atop the wedding cake.

Via Twitter, Lindsay often provides insight into her married life. Back in July 2018, she tweeted— “My husband just said the words “who’s Jordan Peterson?” and I’ve never been so jealous”.

In a Feb 2019 tweet, Lindsay mentioned that her husband, Nick works a second shit, from 3:00 PM to 2:00 AM. According to the YouTuber, Nick commented half hour each way at his “hell workplace”.

Other than his difficult job, the keen fans didn’t seem to know much about Nick. Even his last name remains a closely guarded secret.

Protective about her husband, Lindsay rarely shared a photo of them on Instagram. Whatever the fans knew about Nick came either through her tweets or this 2019 Wired article.

If you didn’t know, Lindsay is bisexual.