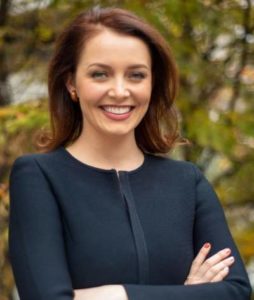 Yet another sexual harassment in the workplace makes headlines!

After the likes of the disturbing succession of scandals concerning Harvey Weinstein, Roger Ailes, and Bill O’Reilly, Governor Andrew Cuomo has been alleged of sexually harassing his former aid Lindsey Boylan for years.

Lindsey Boylan, who served as Andrew Cuomo’s deputy secretary for economic development and a special advisor from March 2015 through October 2018, dropped the unanticipated bombshell on December 13, 2020.

Now running for Manhattan borough president in the 2021 election cycle, Lindsey wrote this early morning, on Twitter that her ex-boss “sexually harassed” her for her “looks” — but refused to share any more information. In her own words:

“Yes, @NYGovCuomo sexually harassed me for years. Many saw it and watched. I could never anticipate what to expect: would I be grilled on my work (which was very good) or harassed about my looks. Or would it be both in the same conversation? This was the way for years.”

In another tweet that followed, she made clear had no interest in sharing further details. Lindsey continued:

“To be clear: I have no interest in talking to journalists. I am about validating the experience of countless women and making sure abuse stops”.

According to The Post, Lindsey had abruptly resigned from her then job following scrutiny of her own conduct in the workplace. Reportedly, three black employees went to state human resources officials accusing her of being a “bully” who “treats them like children”. That and Lindsey was alleged of letting her travel expenses pile up to the tune of $8,000 before reconciliation, plus that she had told a subordinate she’d accept her resignation without consulting human resources.

Lindsey, however, having tweeted the governor’s office was the “most toxic team environment” to work for, did not respond to requests for comment on her own workplace record. Later, she claimed the were more women with similar experiences.

Meanwhile, the spokeswoman for Andrew Cuomo responded the same day, “There is simply no truth to these claims.”

Reports have it, Lindsey Boylan’s birthplace is Santa Fe, the capital of the U.S. state of New Mexico. While at the time of this writing, she lived in Manhattan, New York with her after-marriage-family.

Lindsey Boylan kept her maiden name just as so even after she got married.

Her parents are named Karen A. Boylan and Kieran F. Boylan. Her father, at the time she got married, was the chief financial officer and a vice president at Broad Street Tank Holdings. Also sometime in the past, he served as the country’s veteran.

Also, it seemed, Lindsey has a much elder sister with the name Sheri Boylan.

With looks and charms resembling, some of the most popular media personalities, models, or an actress, Lindsey Boylan stands to a height of 5′ 6″. Lately, her weight was listed as 54 kg or 119 lbs.

She has a beautiful smile and the fairest beautiful skin one could imagine.

Lindsey Boylan went to Robinson Secondary School where she received an International Baccalaureate Diploma. Later, she studied B.A. in Political Theory, History at Wellesley College and enrolled in for an MBA at Columbia University – Columbia Business School.

She has forever been busy afterward– from working as a Congressional Intern or as the Trustee of Wellesley College to serving as the Director of Business Affairs for Bryant Park Corporation.

While in recent times, she is an active member of the advocacy company NAMI-NYC, works actively in the Powerhouse Committee
of Run for Something. More so, LinkedIn introduces Lindsey as a self-employed Public Servant– Lindsey Boylan for Manhattan Borough President.

Reportedly, Lindsey Boylan had $400 thousand in net worth.

Lindsey Boylan has been married to her husband LeRoy Kim since 2012.

They were pronounced husband and wife at the Sleepy Hollow Country Club in Scarborough, N.Y. John P Ellis, over a ceremony officiated by a dear friend of them.

Almost a decade later, they are a happy family of three, joined in by their only kid (daughter) Vivienne. 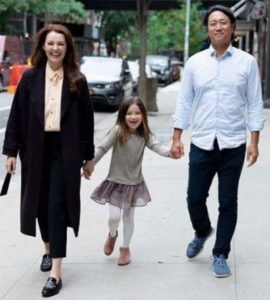 Lindsey’s long-time husband LeRoy, as per his LinkedIn profile, is a Managing Director/Merchant Banker at Allen & Company LLC.

Regarding education, LeRoy acquired a (1989-1993) Economics degree from Princeton University. His mother, Suzan H. Kim originally of Pocantico Hills, New York, is the owner of Stillman Studios, a women’s apparel company in the area.