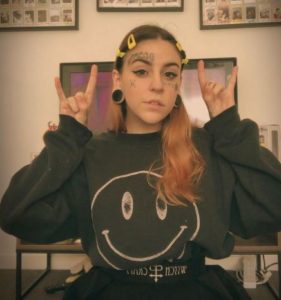 In Aug 2021, news broke that Caleb Finn and his girlfriend Lil Soup are expecting their first child. Caleb, who has 11.1 million fans on TikTok, posted the news of an upcoming baby on his social media. This brought attention to Caleb’s girlfriend who is a fellow TikToker.

In this Lil Soup Wiki, we reveal her real name, family details, a career as a TikToker, and Caleb Finn’s relationship.

TikTok star Lil Soup, whose real name is Jennifer Moraitis, hails from her hometown of Melbourne, Australia. She is extremely private about her family members, most importantly her parents.

Her mom was featured on her TikTok on 27 December 2020 and a few times after that, but she never gave away any details on her mother. As for her father, he was never featured on her social media.

Lil Soup was born as the youngest of three children to her parents. Her brother Dimitris, is the oldest in the brood. He is a musician by profession, playing guitar on a metal band Without Belief. Like Lil Soup, he is also tattooed all over his body.

Dimitris goes on Instagram by the handle name (@dimighost) and was in a relationship with his girlfriend Marissa. They were together since April 2015. In fact, Lil Soup and Caleb Finn weren’t the only expecting parents. Her brother and his partner were due on 24 November as per their social media.

Britta Moraitis, the middle child of the family, is a cosplayer and a model. She, along with Lil Soup, competed in several events and competitions and walked out victorious. She is in a relationship with Nathan Lagos and Nathan’s mom has already considered Britta her future daughter-in-law.

Lil Soup stands tall at the height of 5 feet 7 inches (1.70 meters). She was often compared with Lil Xan, 6ix9ine, and other rappers with face tattoos.

Professionally, Lil Soup is a social media content creator, particularly a TikToker. She found fame and wide recognition based on that. She posted her first TikTok on 17 January 2019 and consistently created videos to entertain her followers.

This interactive nature of Soup earned her burgeoning followers.

On 18 May 2020, Soup thanked all of her 10k followers for supporting her through the journey to that point. On 28 June, she also announced that she was going to do Twitch live streams.

This active participation on social media is likely to earn her sponsorships and endorsements. While not creating TikTok content, she paints.

Lil Soup is a painter, and an impressively good one, so to speak. She has displayed a few of her works on her TikTok. Besides that, she is also a cosplayer like her sister. In October of 2015, both sisters competed and secured 1st place in the competition. Soup won for Best Anime category in the event whereas her sister won first place for best female.

On 1 March 2021, Soup wrote that she missed spending thousands of dollars and spending hundreds of hours making cosplay.

Lil Soup and Caleb Finn started dating each other at least since November 2019. Even though they were deeply in love with each other and fans were rooting for the two to end up together, no they aren’t engaged yet (as of Aug 2021).

Many fans of Caleb first noticed her as a transition girl on Caleb’s video. But, she has created a fandom of her own who follows her every move. 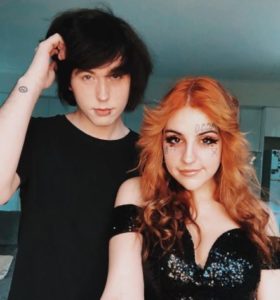 The dating couple broke the news about having a baby with an elaborate video that Caleb posted on his IG titled The Reveal. Then he posted the sonogram of his first-born on his Instagram, then another video The Story of You, and finally his baby mother holding her baby bump.

Mama Soup, on the other hand, appeared on Instagram while holding her baby bump. She posted two videos on TikTok, which went viral.

On the other hand, fans of both were excited to welcome the baby to the world. They congratulated Mama Soup and Papa Finn.