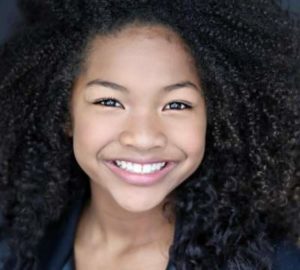 CBS viewers were quick to spot the teen actress Laya DeLeon Hayes in her new role of Delilah, the teenage daughter of Robyn McCall played by none other than Queen Latifah on The Equalizer.

Just in: considering the success of the project’s previous franchise, Laya is confident the crime television series (premiered on CBS on February 7, 2021) will be a turning point in her career.

Keep reading and get to know her closely in the Wikipedia-style writing below.

Laya acquired a blended multi-racial ethnicity from her parents. Her mother, Gina Hayes is a Filipino, and her father Kevin Hayes is a Black.

So, they made sure that Laya learns and appreciates the essence of both cultures.

Laya was born in Charlotte, North Carolina, and grew up, without siblings, in Grand Prairie, Texas. Growing up, she was extremely close to her Filipino grandparents.

Her grandparents immigrated to America from the Philippines in the 1970s. Her grandfather, who died recently, was a retired U.S. Navy veteran.

Also, her other sets of grandparents, lolo and lola, come from Pangasinan; respectively, and precisely from Mangaldan and Umingan.

Laya, now, resides in Los Angeles, California with her family. She has never been to the Philippines, but hopes love to visit her folks’ native place someday.

Not long after she celebrated her sweet 16th birthday, Laya DeLeon Hayes stood 5′ 3″ tall in height and a lately reported weight of less than 56 kg.

Laya shares a very close resemblance with her mother. She knows just the best ways to sport her natural ultra-defined curls. Also, her eyes are the matching shade to her black hair and she has fuller pink lips.

While Laya may have you believe she has already learned her way through social media, it’s her parents who have been monitoring her activities on social media (since at least 2014).

Laya DeLeon Hayes has been acting, singing, and dancing since she was 5 years old.

Before Laya DeLeon bagged the part of a smart and observant Delilah in The Equalizer, she was already quite popular for voicing the titular role in multiple awards nominated Doc McStuffins. The animated series also earned her an NAACP Image Award nomination.

Only a 9-year-old when she booked the role of the first-ever Black/Fil-Am animation character on Disney Jr, the young talent went on to appear on way TV shows and a few movies.

Some of her television credits include Just Add Magic, Liv & Maddie, Raven’s Home, Cougar Town, Grey’s Anatomy, Quantico, Code Black. She did notable jobs in the likes of TV movies Hey Arnold: The Jungle, Santa Hunters, and Most Likely To, and several national commercial campaigns.

This way, the unfinished journey until her very first lead in a live-action TV drama series, earned her a net worth of nearly $1 million.

In the coming days, she looks forward to making her resume even better than it already is by expanding her career with each role and project that she gets to be a part of.

Laya DeLeon Hayes Boyfriend, Is She Even Dating?

And naturally, her fans are also curious, if Laya DeLeon has a boyfriend— Is she even dating?

Just as Laya admitted to Asian Journal she is a new girl in this weird time of growing up where she’s not a grown woman yet but also not a baby. It’s about time, she develops romantic feelings for someone but let us also not miss the fact that she is so focused on her career and also very busy with her studies.

For someone who has been acting, singing, and dancing since a 5-year-old, her work is her number one priority at the moment. And it’s already not easy for her to spare time for the likes riding a bike, rollerblading, drawing that she loves dearly.

Meaning, we might have to wait for a while before we saw her committed and in a serious relationship.