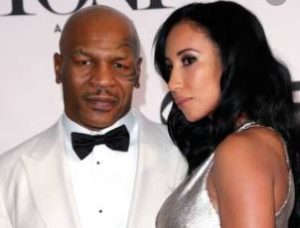 Lakiha Spicer is Mike Tyson’s third wife who helped him turn his life around. “The Baddest Man on the Planet” admitted that “without wife”, he was a “savage animal”, and that was also the reason he got married thrice.

In 2021, his life story was chronicled by ABC in a two-part documentary series called Mike Tyson: The Knockout — the first of which premiered on May 25.

So, who is the legendary boxer’s wife? Get to know all about her as this Lakiha Spicer wiki proceeds.

As per her birthday, Lakiha is of the Gemini zodiac.

Like Mike, his wife Lakiha Spicer is of American nationality. She was born to her parents — Faridah Ali (mother) and an anonymous father. It seems that her birth parents were separated while Lakiha was a child, and she grew up with her mother and stepfather, Shamsuddin Ali.

According to Lakiha, her stepfather once took her to one of Tyson’s boxing matches when she was 18.

Also, it was reported that Shamsuddin, who was an influential Muslim Cleric in Philadelphia, served time in prison for murder in the early 1970s until his conviction was overturned. Back then, he was known as Clarence Fowler, and he garnered national attention in 2005 after being convicted of various racketeering charges originated with a drug investigation. He then went on to serve 7 years in prison and was released in 2013.

Talking about Lakiha’s mother, Faridah previously went by the name Rita Spicer. She worked as an Assistant Director of Education for the Sister Clara Muhammad School in Philadelphia. Reportedly, Faridah/Rita was born on Jan 10, 1949, making her 72 years of age in 2021.

As of May 2021, Lakiha was neither present on Instagram nor Facebook.  Also, she wasn’t featured over any of Mike Tyson’s IG posts as well.

The boxer then flaunted 14.7M followers over IG.

Reportedly, her body measurements were 36-25-35 inches.

Her Job: What Does She Do For A Living?

Being a wife of an over $10 million net worth boxer, Lakiha Spicer did not need a job. So, as of 2021, she was a stay-at-home mother, a homemaker, and a socialite.

Although in the above paragraph, we’ve shared that she did not need a job, it didn’t mean Lakiha never had to earn a living. Previously, she and her brother Azheem Spicer were paid teacher salaries at Sister Clara Muhammad School in Philadelphia. But later, it was known that the two never taught any classes and pocketed about $71,000 as part of the scheme.

Thus, Lakiha was charged two counts of conspiracy, four counts of mail fraud, one count of theft for receiving federal funds, and one count of false statements. On April 1, 2008, Lakiha was sentenced to six months in prison and a $30,000 fine in restitution.

Reportedly, she was one of six people charged in a money-laundering scheme in Pennsylvania in 2004.

Trivia: Lakiha’s brother is three years older than her and celebrates his birthday on February 14.

Lakiha Spicer might have first seen Mike Tyson when she was 18, but it wasn’t until 23, she was introduced to the boxer by the promoter Don King.

So, the duo’s dating story began in 1999, while Mike was still married to his second wife, Monica Turner. The two then went on to have an on-and-off relationship for a long time, and finally on June 6, 2009, Lakiha and Mike tied the knot at the La Bella Wedding Chapel.

Their wedding was held in less than two weeks after Mike’s daughter, Exodus died in a tragic accident. Sadly, Mike’s 4-year-old was strangled, stuck in a cord hanging from a treadmill.

As of 2021, Lakiha and Mike were still married and living in a $2.5 million home near LA with their two kids. Their firstborn, a daughter named Milan Tyson, came to this world in Dec 2008, and their second child, a son named Morocco Elijah Tyson was born on January 25, 2011.

Did you know: Lakiha was pregnant with Milan while she served time in prison back in 2008.